Swingyde help a s players develop a proper hinge and to feel what a wide arc, lag and speed can do for more power

Keeping it simple is a common phrase in golf instruction these days. Until, that is, an instructor starts dissecting things from head to toe.

So when a simple device comes along that has been used for more than 20 years by PGA Professionals across the country, perhaps it’s worth another look.

For a small piece of curved plastic, Swingyde can do some big things for a user’s swing, mainly by ensuring that their hands are set properly at the top of the swing to maintain a more consistent arc and plane throughout the motion. Students can also check and feel the clubhead position at the top of the backswing with the device, that touches the shaft and their wrist, and Swingyde also enables them to maintain a powerful lag position on the downswing.

“This is a very good swing trainer,” says Zach Allen (pictured left), a PGA Director of Instruction at Vista Valencia Golf Course in Valencia, California. “Certain things, such as poor or no wrist hinge, are almost impossible to cure without it, to be honest.”

Allen says that improper hinging of the wrists in the backswing can result in a domino effect where a golfer loses speed and power through the hitting area. If the downswing is started from a point where the arms are bent incorrectly at the top of the backswing, the tendency is for the arms to straighten out prematurely in the downswing in an effort to generate power instead of letting it happen naturally. 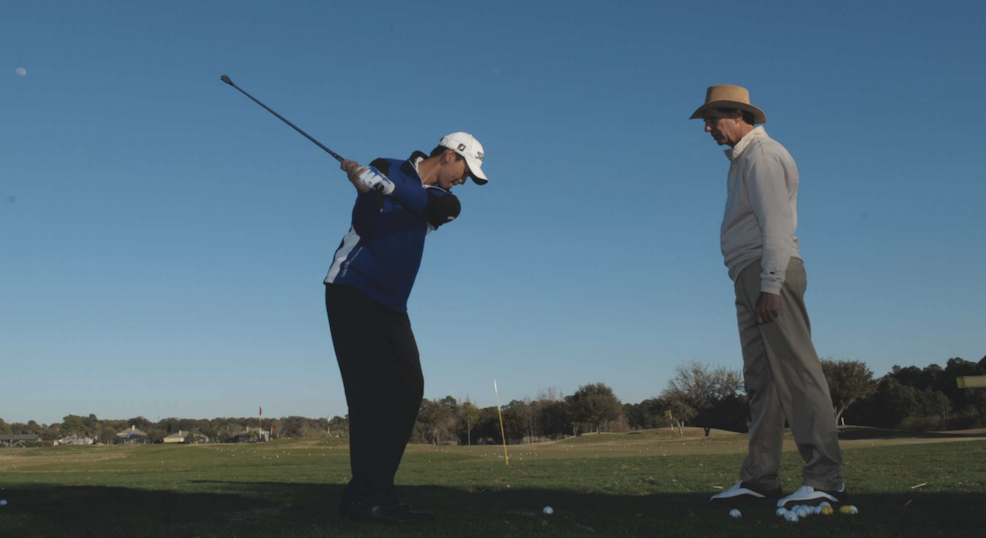 “Once you hinge your wrists, or know the proper sequencing and timing of that part of the swing, you’ll increase your swing speed and power dramatically,” he says. “Once a student gets it on, it will do what it’s designed to do. It’s difficult to tell people about hinging their wrists or what it should feel like, but this gives them instant feedback because the Swingyde has them in the perfect position automatically.”

To help students use the Swingyde properly, one end clamps onto the club’s shaft and the other angles toward the wrists. The end near the wrists has a gentle “C” shape that cradles the forearm and is what the user will feel, for the most part, when the wrists are hinged properly.

Once in place, students can take partial or full swings, in addition to hitting balls, and the cradle end of the Swingyde gives them feedback on their swing plane and clubface angle.

After impact, users should feel the correct radial deviation of the leading wrist, which will make sure they extend toward the target with a good weight transfer and balance.

“It helps with what I like to call ‘educated hands,’ which are important to hitting the ball with a square clubface and on the sweet spot,” Allen says. “This is really good for that because you can hit balls with it, too. It gives students the total correct feel of the wrists from start to finish.”

Other areas of the swing that Swingyde is designed to improve are grip, width of arc, the completion of the backswing, swing tempo, impact position and keeping the followthrough on plane.

It also is geared to eliminate flaws such as too much bend in the lead arm and cupping of the lead wrist at the top of the swing, rolling the wrists open and laying the club off on the backswing instead of hinging upward, casting the club when starting the downswing and a collapsed finish with no extension.

“I have been using the Swingyde for over 20 years and still have not found anything better,” says Mike Bender, who owns and operates the Mike Bender Golf Academy in Lake Mary, Florida. “Depending on what the student’s problems are in setting the club, we can put the Swingyde on to fix their backswing issues regarding face angle and wrist set. The number of drills that we use it for are too numerous to list.”

For the majority of his students, Allen keeps the Swingyde at a neutral position so they get the feel for a square clubhead at address, impact and at the top of the swing. For his better players, Allen occasionally adjusts the device so the clubhead is slightly closed or open at the top to promote a draw or fade, or to fix a hook or slice, depending on what he sees.

“That’s another good thing – it can be used by all skill levels,” he says. “For my beginners or starting women who often collapse their arms or keep their wrists straight during the swing, the device helps immensely in those areas.”

Both Allen and Bender also like Swingyde for fixing club face problems at the top of the backswing, with Allen saying that he tells students to “feel” the clubhead at the top.

“That’s a difficult concept for many to grasp, since they’re often worried about just getting the club back to the ball as quickly as possible,” he says. “With Swingyde, they have a nice arc and can feel a pause at the top of the swing, which is great for coming into the ball with the proper sequence and on the best angle.”

And, like the product, Bender keeps his ultimate praise for Swingyde simple.