Wishbone Brawl Brings the Community Together to Celebrate the Game

While all eyes were on“The Match” in Las Vegas last November, just 320 miles away in Oceanside, California, another course was preparing for its own exhibition match the following day. This event, however, had quite a different vibe than the Tiger/Phil faceoff.

Hills are abundant at the aptly-named Goat Hill Park, where the practice range is elevated more than 75 feet above the landing area. Picking the range is a labor of love for the staff at the Southern California municipal course. However, before the gates opened for the match, volunteers were on the range pitching and organizing tickets, junior golfers walked the course in preparation to caddie, and employees were gearing up to welcome an entire community and celebrate golf – that’s mindset of Goat Hill Park every day.

“World Class, working class” is the motto for the 4,454-yard short course saved by John Ashworth and Geoff Cunningham, co-founders of the Linksoul Brand. That mantra radiated volumes the Saturday after Thanksgiving when it hosted the second annual Wishbone Brawl – an exhibition match between PGA Tour professionals Charley Hoffman and Xander Schauffele versus Dean Wilson and 2003 Masters Champion Mike Weir. Tickets were $20 and kids under 18 were free. All proceeds from the event went to the Charley Hoffman Foundation, benefiting children’s charities in San Diego and Las Vegas. 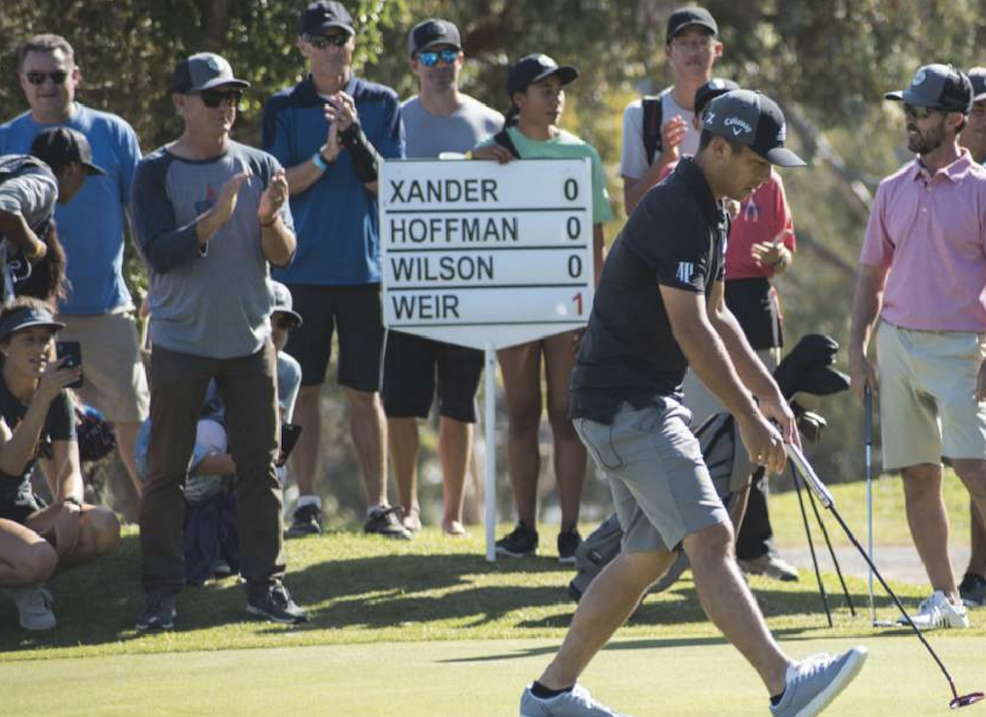 Rather than a closed off pay-per-view event at a private club, the Wishbone Brawl was an open invitation to locals and the perfect way to cap off another successful year of revitalizing a municipal course in dire straits – a celebration of community, family and a love for the game.

“In my 30-plus years playing golf, I’ve never seen an event like this,” said Megan Mahoney, executive director of the San Diego Junior Golf Association. “Golf needed to transition from being a little stiff and bring the game to the general population on a bigger scale. Goat Hill Park is the epitome of that effort: grass roots, grow the game and welcome all.”

The Wishbone Brawl was the brainchild of Ashworth and Wilson, who can often be found at Goat Hill Park walking the fairways with his persimmons and his dog Toby. The event kicked off at The Playground – a new 3-hole track where kids play free. The crowd watched from the hillside as juniors walked alongside the pros and played a few holes of alternate shot together. It was followed by an 18-hole match where patrons could engage with the tour pros they normally see on TV and kids could be part of the action.

The event was a powerful reminder of the positive impact a municipal course can have on a community. Even Weir found the experience reminiscent of his childhood and was in awe by the magical transformation of the municipal course.

“Goat Hill Park is something unique–it’s a short course, you can bring your dogs, play with persimmons and then there’s the Playground for the juniors…it reminds me of my love for the game and learning it as a kid,” Weir said.

Golf Channel’s Matt Ginella, who was the MC for the event, brought his own family to partake in the festivities. He has ventured around the world to the most iconic courses but believes something about Goat Hill Park sets itself apart from the rest.

“Visiting Goat Hill Park is a massage for the soul,” Ginella said. “They don’t treat it like a golf course, yes, there’s golf involved but they treat it like a community – it’s also a green space and a park, you see dogs and kids, there’s no dress code, people can feel welcome instead of being turned away…there’s a ripple affect with a place like this.”

He believes Goat HillPark can lead by example and encourage more courses to reinvent themselves to keep the game thriving for future generations.

Mahoney hopes that the Wishbone Brawl will inspire courses around the country to find passionate people in their community and create events that will foster new golfers.

“Maybe it’s not exactly like (TheWishbone), but you just have to get creative and think of what will bring your community together,” she said. “It’s a no brainer—anytime the community has a fun place to go that’s safe, family friendly, affordable and a healthy environment, the whole community thrives.”