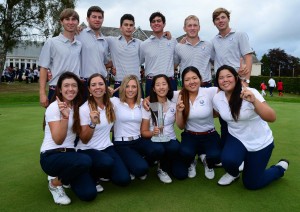 The United States of America sealed a fourth successive Junior Ryder Cup title courtesy of a breath-taking 16 – 8 victory over Europe at The Blairgowrie Golf Club, where Amy Lee sealed the crucial point with a 6&5 win over Germany’s Alex Försterling.

Brian Whitcomb’s American charges entered the final day with a 712 – 412 lead and while there were some fleeting moments early in the day where it looked as if a European comeback may have been mounting, the visitors quashed any ideas of a ‘Miracle at Medinah’ repeat with devastating efficiency.

The second match of the day provided a perfect example of the courage shown by the overnight leaders as Sam Burns earned an incredible half point against local hero Bradley Neil, the Scotsman who grew up on the host venue course.

The match was dormie in favour of the Amateur Champion but, in front of huge home crowds, the Louisiana player capitalised on a mistake from Neil at the 16th before birdieing the 17th to win a second of three successive holes and sinking a 35-foot putt at the 18th to draw the match level.

In the end, it came down to 17 year old Amy Lee, who epitomised the incredible golf on display from the Americans by winning courtesy of four successive birdies from the tenth hole. The 2013 Women’s Junior PGA Champion was delighted to have been the one to rubber-stamp the victory for her team.

“It feels really good,” she said. “I played absolutely flawless today, I think I was five under through 13 holes. I birdied ten, 11, 12 and 13 coming in to win the match so it was amazing.

“On the 12th green I just saw that we needed a half point to win the cup and it feels incredible that I was able to capture it.

“I didn’t make any mistakes today, missing two fairways. One of them, at four, I was deep in the fescue and punched out to about 125 yards and hit it to a couple of feet to save for par. The other was at five in the hay as well and I laid up and then I pitched it to a centimetre from 70 yards for birdie. Every time I made a mistake I bounced back really well.

“It’s always an honour to represent your country and it’s great to do the job. I knew all the players pretty well coming into this week but I’m really happy that we got to bond with the European team this week too.

Burns, meanwhile, was delighted to have staged such a turnaround, especially under such pressured circumstances, but was inspired by the performances all week of his team mates.

“It was a crazy match,” said the 18 year old. “I knew it was going to be a tough one in Bradley’s home town, with all the people out here supporting him. I knew he would have an advantage but we talked all week about never giving up and that’s truly what I did today.

“I knew I was never out of the match, even being three down with three to play I knew my team mates were out there putting their hearts into it so I figured it was the least I could do. To win the last three was really special to me.

“It was a putt of a lifetime at the 18th. I actually felt pretty comfortable with the line but I knew halfway when I hit it that it looked pretty good and when I saw it go in dead centre I just went crazy. I’ll remember that for the rest of my life.”

The Europeans, meanwhile, were disappointed not to have been able to turn the tide early on in the final day but put it down to the putting prowess of their opponents on a week when many new friends were made between both teams.

“It’s always bad to lose but we did everything that we could and the Americans were better,” said Linnea Ström of Sweden, who halved her match with Bethany Wu. “Every one of their players putted better. I’m happy to have played well today.

“Bethany and I played great golf against each other, I think we were both seven under so that was great. It’s been a great experience for all of us.”

Ström’s compatriot Marcus Kinhult, who won his singles match by 2&1 over Gordon Neale, agreed that the week had been a great experience despite the defeat.

“It feels bad but they were better from the beginning,” said the 18 year old. “We expected more from ourselves but they were better on the greens and that was the difference. They holed a few more putts than us, especially some big ones at the end of the first day, so they deserve it.

“It’s been a great experience. It was a lot of fun, we’ve all made new friends and now Gleneagles will be great fun to play the course and watch the big guys. That will be cool. All experiences are good experiences, even if we lost so I will learn from this.”

For the complete results, visit JuniorRyderCup.com.