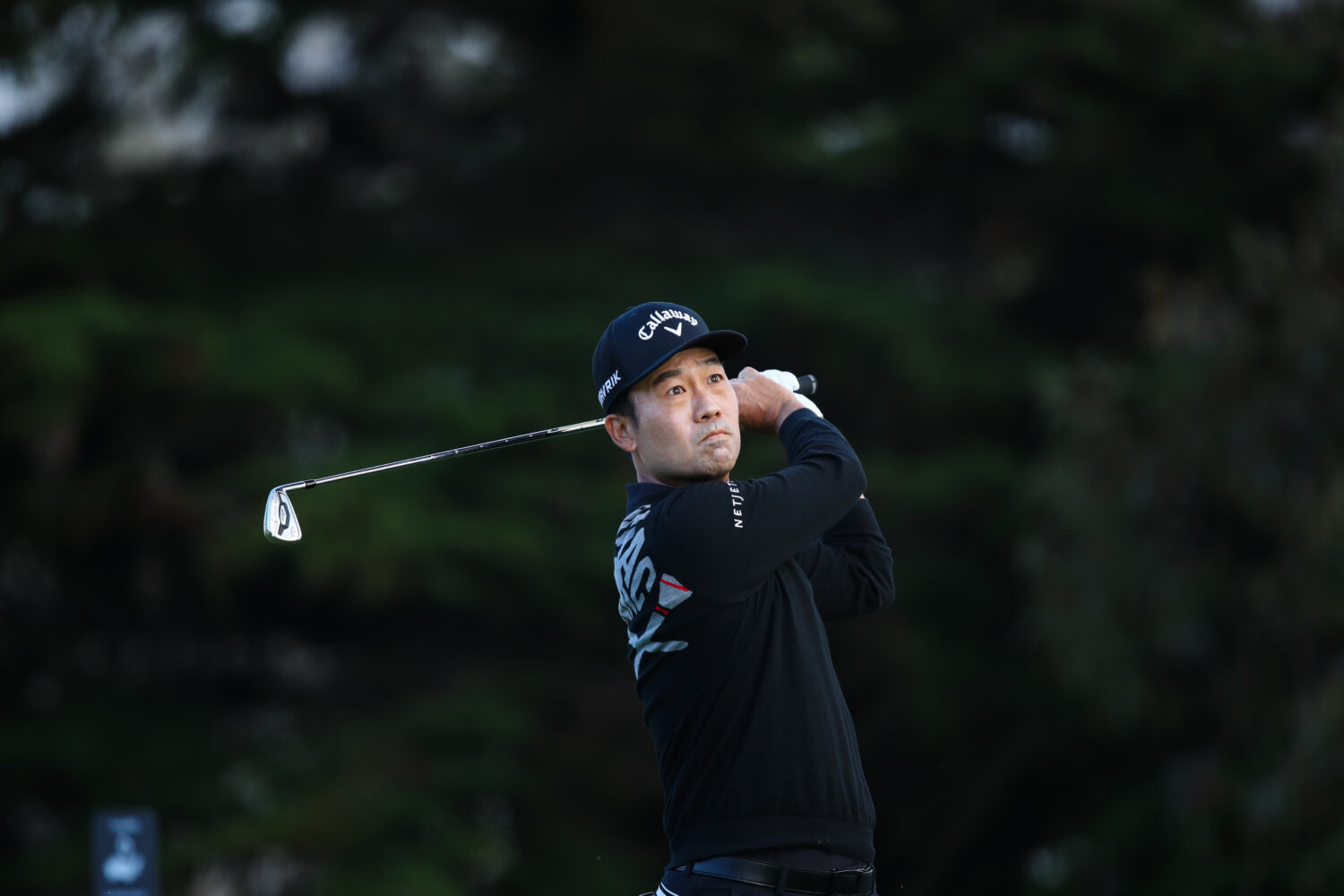 Photo by Christian Petersen/PGA of America

When you turn on the tv to watch some golf and see a player walking in putts, it’s usually Kevin Na. The 38-year-old five-time PGA TOUR winner does a lot of things his own way, including the walk-in putts and hitting his driver off the deck. We get into the latter in this interview, as well as some of his practice habits that will help our games.

Golf Range Magazine: You played your first ever TOUR event as a 17-year-old at Torrey Pines – if I would have told you that two decades later, you’d be a five-time winner, what would you have said?

Kevin Na: I would have said I’ll take it (laughs). I forgot about that event. I remember playing a Monday qualifier for Torrey Pines that week and I shot 66 and made it to a six-man playoff for one spot. I canned a big-breaking downhill left to right 30–35-footer, and I remember my dad, who was caddying for me, and I screaming and high-fiving. Man, I forgot about that. You know who was also in the playoff? Bo Van Pelt had a ten-footer to tie me and he missed it and that got me in. At the time he was on the PGA TOUR and he must have thought ‘‘who is this punk taking my spot?’’

Golf Range Magazine: How do amateurs become good grinders and develop a short game like yours?

Kevin Na: Amateurs don’t spend enough time on their short game. You have to have a lot of different shots around the greens, which means you have to practice a lot of different shots. No matter what you did to get up to the green, you have to have the mentality of “it doesn’t matter how you got there.” You have to focus on what’s in front of you and do whatever it takes to incur the fewest number of strokes around the green. Sometimes it might be chipping to ten feet away from the hole because that guarantees you a ten-footer for par instead of trying to pull off the miracle shot. But you have to know the level of your game.

I’ve always been a good chipper with my sixty-degree wedge, and that’s just about the only club I use for chipping. During the Open Championship, where we need to get a quick feel for the bump and run that’s required out there, my caddie Kenny Harms and I will have matches where you can use any club in the bag except the sixty-degree. And it’s often pretty close between us. He drives it like a drunk man but his short game is like a TOUR player’s.

Golf Range Magazine: In your opinion, what’s the best way to practice chipping?

Kevin Na: I tell amateurs to have their handle forward and lead wrist flat when practicing their basic chip. Then you can mess with your hand position at address – forward, back, ninety degrees. You have to have a feel for where your hands are, and I think that develops the skill of chipping. Get the feel of controlling your loft with your hands, and the more you practice it the better you’ll get.

Golf Range Magazine: What about bunker shots? How can we improve our setup and enhance our practice?

Kevin Na: I know my wedges and their bunker distances – 60 degree is 20-25 yards and 54 degree is around 32 yards. Then I have my distances for pitching wedge, 9 iron and even 8 iron. But you have to practice it – just open the face and hit it fat. And on a longer bunker shot, all you have to do is hit it fat and hard and it will run out. But also remember that your bunker shots will cut. The longer the club used, the more left to right spin the ball will have. 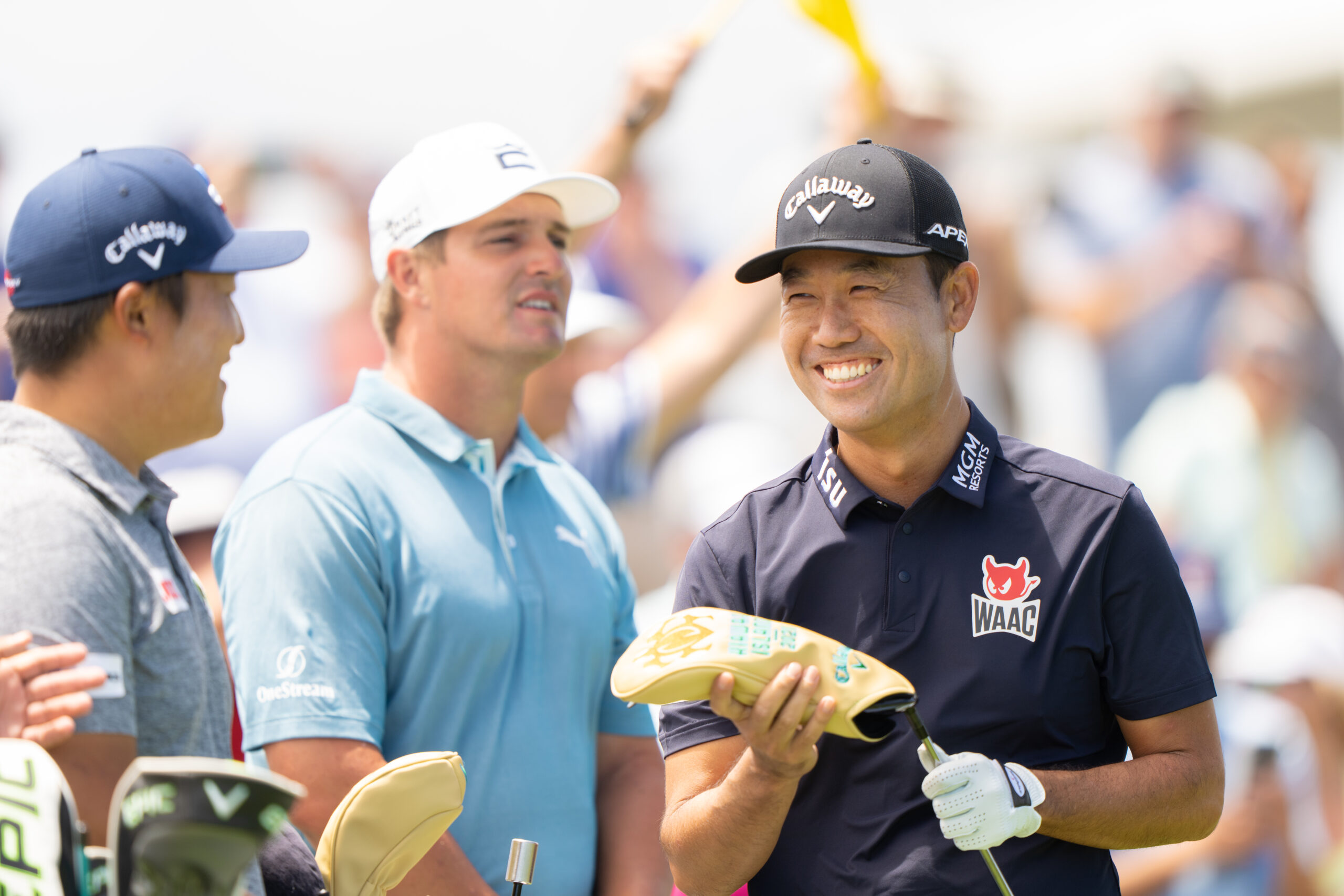 (Photo by Darren Carroll/PGA of America)

Kevin Na: It depends, since we have less time to prepare in morning rounds. I want to sleep as much as I can (laughs). But usually, it’s anywhere from 50 minutes to an hour. I always start on the putting green, however.

When I practice on the range, I start with my sand wedge. I work through my bag a little differently than most other players. I’ll go 54 degree, pitching wedge, 9 iron and 7 iron. Then I’ll throw driver in there and hit five drives, 5 iron, 3 hybrid, 5 wood and 3 wood. Then I’ll hit driver again. Then I’ll go chip for five to eight minutes, and then return to the putting green for seven to ten minutes. I’m on the tee seven minutes before my tee time to get my scorecard. Man, you don’t want to be late for that first tee.

Golf Range Magazine: Why hit the driver twice in your warm-up?

Kevin Na: Because I believe it’s the weakest part of my game. Though, I feel like over the years I’ve gotten better about putting the ball in play. I’m not a long hitter and for a while I wasn’t hitting it that straight. But now, I’m a pretty straight hitter.

Golf Range Magazine: Speaking of driver, you’ve become known on TOUR as a guy who loves to hit driver off the deck – where does that mentality come from?

Kevin Na: When you’re not a very long hitter, sometimes you’ve got to run it up these par 5s. So, I started practicing getting home in two with driver off the deck. I’ve pulled off a lot of great shots, but I can’t help but remember I did lose a tournament using driver off the deck in a playoff in Napa a couple years back. People forget that on the 72nd hole of regulation I took driver off the deck, hit it just off the green and then got it up and down for a birdie. Then I drove into the same spot in the second playoff hole and it was a little dark and I hit it a little fat and even had some sparks going (laughs). So, it got me into a playoff, but also lost me that playoff, but it happens.

Golf Range Magazine: Regarding hitting driver off the deck, what’s your comeback to the naysayers?

Kevin Na: If you’re a PGA TOUR player and you’re good, you can hit driver off the deck. Obviously, it’s a really low percentage play for an amateur. Unless you’re a five handicap or better, don’t even try it. My dad is almost a single digit handicap and I tell him that the lowest lofted fairway wood he should have is a 4 or 5 wood. The most important thing is to make good contact from the fairways.