During his thrilling playing career, Tiger Woods has been known as one of the great workers and students of the game, spending hours with top teachers honing his skills and practicing at unmatched locations. So perhaps it’s only fitting that when Woods, the designer, crafted his first American golf course, Bluejack National, located Northwest of Houston in the tiny town of Montgomery, Texas, he made sure he had world class practice facilities.

The course, which will open in early November, has spared little expense and planning in a championship course and practice facilities to match. “It’s all about the concept of time,” says Bluejack President and longtime Texas golf veteran Casey Paulson. “It doesn’t matter if you’re the best player in the world or just on site for a weekend match. You may only have limited time and this comprehensive practice facility allows you to make the most use of it.

“Our team has spent at least a couple million dollars to fully incorporate the complete Tiger Woods practice philosophy.” Start with one of the largest practice putting greens ever built by the Medalist golf construction firm, some 28,000 square feet and featuring different levels that can be divided into an 18-hole practice putting green for an added competitive element. There is a double-sided practice range 300 yards long by 30-40 yards wide. Nike Golf, Woods’ longtime sponsor, is part of the new golf performance center, which includes two private hitting bays, video teaching equipment Trackman and a SAM putting lab.

Given Woods’ commitment to fitness, there is a full workout facility as you would expect. In addition, there’s an outdoor patio and bar when golfers need a little rest from all the practice or just want to hangout and enjoy the ambiance of the pristine practice range. 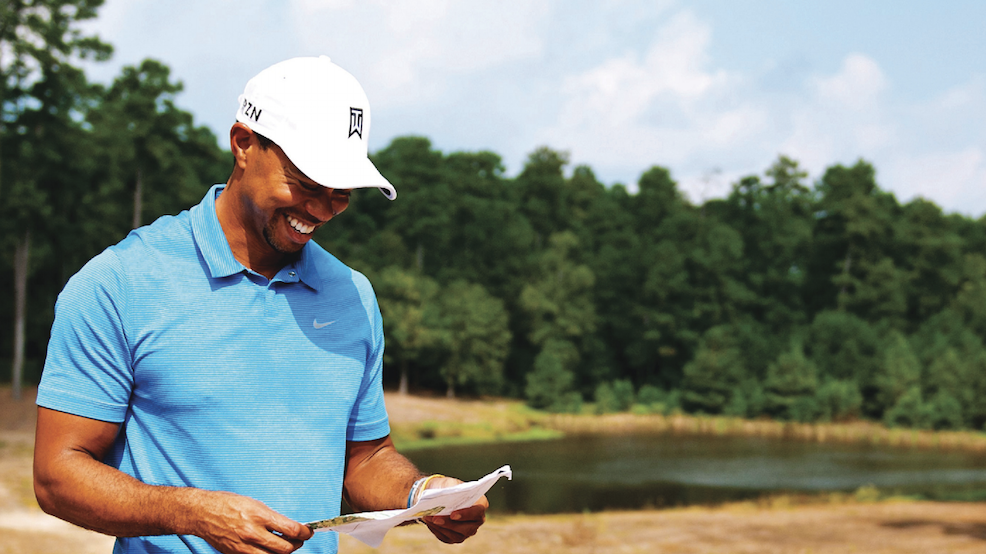 Top it off with a 10-hole short game course known as the Playgrounds. It features holes in the 30 to 140- yard range with lights in the trees, allowing golfers to practice and play long into the night – a first for any course in the area. While many upscale facilities shy away from placing lights on the practice range, hiding them in the surrounding trees prevents the eyesore of giant lamppost while offering golfers more opportunity to practice.

Woods has already made four trips to Bluejack to oversee his second designed course after opening one in Cabo San Lucas, Mexico last December. Unlike some of the tough and rugged courses Woods conquered in his decade-plus legendary golfing run, Bluejack is player and family friendly with large, open fairways and very little water or rough to lose golf balls. The par 72 course can play as long as 7,475 yards, but shorter and more manageable from the forward tees. The entire course facility is 105 acres, which includes some room for limited homesites, but there is plenty of room for the practice facility just to the right of the first tee box.

“Tiger and his team really put a lot of thought into the practice facility,” says course superintendent Eric Bauer. “The back end the tee box is not all flat and perfect, because the golf course isn’t. The tee has some different elevations and some rough area because that’s what you may face out there.” From the slightly elevated practice range golfers can peer down to a large expanse of green grass with at least two bunkers and two large trees in the middle of the range, another Tiger Woods touch. “Tiger wanted the trees in the range because he likes to curve the ball,” Bauer says.

Paulson, who has been part of the project from Day One along with longtime Texas golf course golf expert Michael Abbott, said Woods wanted the best for Bluejack, but also wanted something he was familiar with. “Parts of the practice facility are just like Tiger’s back yard in Jupiter, Florida. It’s a great place to practice, play and have fun with family and friends,” says Paulson.

That’s what makes the 10-hole Playgrounds the most unique part of the Bluejack practice facility. Woods has said he wants Bluejack and other courses he plays or will design to be a place he can bring his kids to where they can learn and enjoy the game in ways he never imagined as a junior. The densely wooded short course is designed as a place to entertain kids, settle golf bets, practice for 18 holes the next day or dial in your yardages with a variety of short clubs. The lights even provide respite from the often brutal and humid Southeast Texas temperatures. From professionals to amateurs, Woods’ Bluejack practice facilities cover all stages of the game.