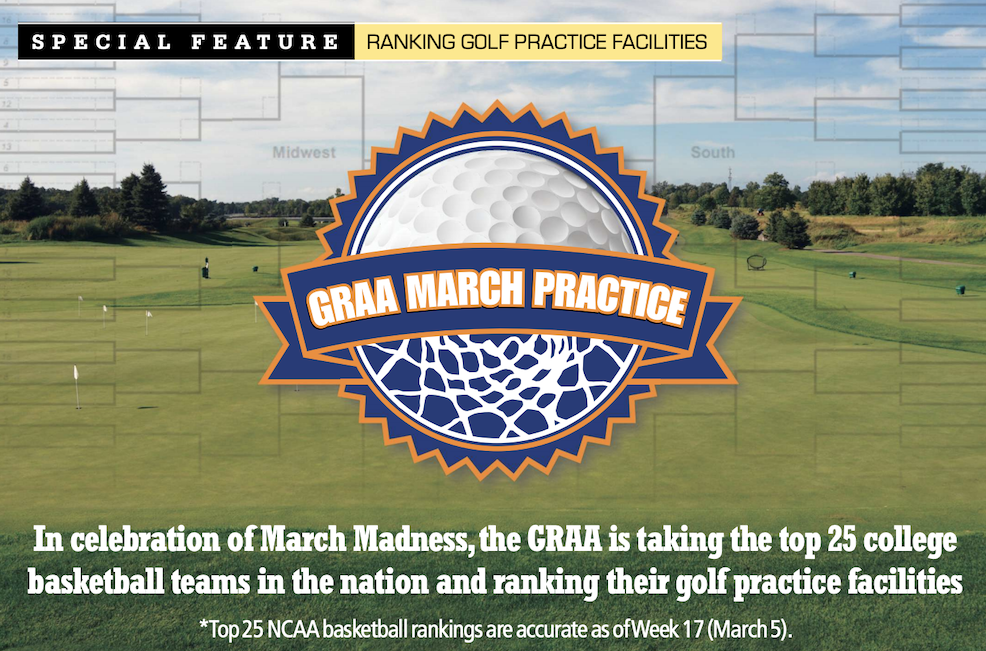 You’ve heard of NCAA March Madness, well this is the GRAA March Practice. Similar to the USA Today Coaches Poll, we reached out to golf coaches representing the top 25 ranked universities in this month’s b-ball tournament and asked them to rank the premier collegiate golf practice facilities in the country.

The Tom Spurgeon Golf Training Center is named in honor of a Purdue alumnus who made the lead donation toward the 11,400-square-foot training center. The state-of-the-art range and practice facility is open to the public and features indoor hitting bays that allow golfers to practice inside under gas heaters, hitting outside onto the range. In addition, the adjacent Birck Boilermaker Golf Complex has a full-service short game area that includes two putting greens. The on-campus facility boast two 18-hole layouts: the Ackerman-Allen Course and Kampen Course, which have hosted both the NCAA Championships and NCAA Regionals in years past.

Ohio State University has two golf courses considered by many to be masterpieces in classical golf course architecture. The Scarlet was completed in 1938 and the Gray was finished later in 1940. In 2006, Buckeye legend Jack Nicklaus oversaw a restoration project for the Scarlet course that also included enhancements to the driving range and short-game area. During the winter months, Scioto Country Club, where Nicklaus first learned the game, takes over at the Buckeye practice site – where they have a state-of-the-art indoor practice facility with launch monitors, simulators and a short game area.

Alumnus Jerry S. Rawls made it possible for Texas Tech Golf to have its own golf property donating $8.6 million toward the total cost of approximately $14-15 million in 2001. Completed in September 2003, The Rawls Golf Course at Texas Tech is a 270- acre parcel that features an 18-hole championship course with a 60-acre practice range as well as pitching and chipping areas and dedicated facilities for both golf teams. It was Golfweek’s No. 2 Best Course that you can play in Texas for 2012 and the No. 3 University Course in America.

With a mature 18-hole golf course that meanders through tall oaks, ponds and scenic terrain, Birdwood Golf Course was ranked by Golf Digest as one of the top-10 collegiate courses in the country. The newly announced UVA Golf Facility at Birdwood is under construction. With an estimated cost of $8.7 million, the facility will boast indoor hitting bays, a putting studio, club repair room, nutrition stations, video technology and more.

When the architect of Augusta National designed your home course, you have something special. Michigan’s golf teams compete and practice at, the University of Michigan Golf Course – which was designed in the late 1920s by Alister MacKenzie. A multi-million dollar renovation completed in the spring of 1994 restored the course to the ranks of MacKenzie’s other classics. In May 2017, Michigan dedicated the Richard L. Postma Family Clubhouse, a 23,000-square-foot facility built on the footprint of the previous clubhouse, with views overlooking both the historic Alister MacKenzie design and Michigan Stadium.

Having opened in 1957, it’s no denying that Duke University boast one of the most historic facilities in the country. Even with all of that history, they still have a state-of-the-art practice facility that stretches across more than 20 acres and includes a 20,000 sq. ft. putting/chipping green.

The MSU Golf Center, located at Forest Akers East Course, is midMichigan’s premier golf practice facility. The $1.2 million state-ofthe-art facility opened in May 1997 to rave reviews and steady crowds. It includes a three-acre bent grass practice tee, a separate teaching tee, practice bunkers, target greens and a 20,000-squarefoot putting green. The recently constructed Lasch Family Golf Center ($6 million) features the 20,000 sq. foot Fox Family Putting Green. The practice facilities serve as a major attraction in recruiting top high school golfers to the MSU, as a teeing area is set aside exclusively for the use of the Spartan men and women.

The University of Arizona recently extended its partnership with Sewailo Golf Club, is a challenging course that measures 7,400 yards from the championship tees. In addition, the teams are afforded exclusive access to a separate practice range, which includes bunkering and a pristine short game complex.

UNC Finley has a state of the art practice facility with five target greens to shoot at from the 500-foot long grass practice tee or from 42 mats. The range is designed to emulate on-course play, with target green placements that allow golfers to visualize shot shapes.

The Dave Williams Golf Academy covers more than 4,400 square feet and was built on the Tournament Course range at the Golf Club of Houston – host of the PGA Tour’s Shell Houston Open. Built by LoneStar Construction, the $900,000 facility and was funded through a joint venture of the Houston Athletics Foundation and the Department of Intercollegiate Athletics. The Golf Academy offers four indoor/outdoor hitting bays with the latest technology, including a launch monitor and SAM PuttLab. The Mike and Pat Michigan State Booker Short Game Facility ($300,000) was recently added.

The Melnyk Golf Practice Facility is adjacent to the 14th hole at Mark Bestick Golf Course on the University of Florida campus. The 680-square-foot facility is equipped with a computerized video system that analyzes the Gators’ swing from various angles and then uses the information for technique improvement. Two covered outdoor hitting stations protect golfers from the elements at the two-tiered hitting area. The facility also includes two bunkers and a 10,000-square-foot putting green.

The team has access to eight different golf clubs within 30 minutes of the university. However, most of their work is done on campus at the Wichita State Golf Course Complex. There they have an 18-hole course, two-sided driving range (one side with Bermuda and the other with Bent grass), a 120-yard wedge range, three undulating practice greens, and a heated indoor facility with V1 Pro technology and retractable doors that open onto the range.

The Kansas golf programs have called the Knapheide Family Practice Facility at The Jayhawk Club home since 2008. Offering two 18-hole courses — the Championship Course and the Member’s Course — the Championship Course is reserved for the Kansas golf teams. Recent changes to the Knapheide Family Practice Facility have made it nearly five times larger with even more all-weather amenities. The bays are part of a climate-controlled facility that allow Kansas golfers to hit balls out into the range, regardless of the season.

University of Miami golf teams practice with one of Florida’s, and the nation’s, most historic hotels serving as its backdrop – the 100-year-old Biltmore Hotel in Coral Gables. It’s posh amenities and classic Donald Ross design have attracted dignitaries, celebrities and sports industry leaders for years. The Biltmore Golf Course is an 18-hole, par 71, which reopened in November of 2007 following a $5 million renovation. Its full-feature practice area has everything you’d expect from a luxury resort, including a massive double-sided range, inclusive short game areas and private lesson/practice tees.

Moraga Country Club and Blackhawk Country are two of the most sought after memberships in the East Bay, with the St. Mary’s College golf team being a large reason why. Both of the clubs have had longstanding relationships with the school and have combined with the school to host numerous collegiate tournaments.

Wolf Run Golf Club is one of south Reno’s most popular courses. The course is situated amid the Sierra Foothills, tumbling across a picturesque desert landscape sprinkled with native flora. The hilly terrain is as scenic as it is challenging, providing some tricky uneven lies and there is a meandering creek that slithers along the fairways. The elevated tees offer some spectacular views as well as some intimidating approaches to the fast, undulating greens. In addition to the golf course, Wolf Run also has a practice facility with a range and putting and chipping greens, and club repair center.

After a redesign in 2003, White Manor Country Club was met with rave reviews that included being ranked No. 3 in “Modern Design” and No. 14 in the state of Pennsylvania by Golfweek. An all-weather range with heated bays and covers offers six target greens. The coolest element is a two-hole short game area with seven bunkers, allowing players to work on bunker play from as far as 90 yards. The university also arranged a deal with a local GolfTEC so players can have access to high-speed cameras and launch monitors.

Located about 30 minutes off campus in Hebron, Kentucky, Traditions Golf Club serves as the home base for the University of Cincinnati golf team. While it’s rare for a school’s home course to be in a different state, it works out perfectly for the Bearcats. The private course has been perennially ranked among the top in the state of Kentucky and the team’s head coach, Doug Martin, has been a member there for years.

With a history that stretches back 100 years, the private Point Judith Country Club offers beautiful scenery. The traditional links style golf course sits adjacent to the Narragansett Bay and features nine holes designed by Donald Ross. Golfers from URI are met with pristine practice conditions whenever they venture to Point Judith.