The Moment of Truth and The Impact Bag

Before he began using The Impact Bag, PGA Professional Rick Grayson had only moderate success in teaching students about the “moment of truth” when clubface meets golf ball.

Grayson would have students make a swing and freeze at the bottom of the swing so he could teach them what needed to be done at impact. “This was somewhat effective,” he recalls. “However when they swung full speed and then stopped at impact, it taught deceleration.” 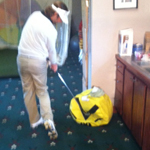 That changed when he began using the Wiren-authored device 20-plus years ago. Since then, he has employed it in a variety of drills to help students. “I have found it really helps to place it on the outside of the left heel for a right-handed player to help establish a solid base for the swing,” says Grayson. “I also like to play catch with my students with The Impact Bag to teach them about weight distribution. I stand far enough away from them so they have to use their whole body, not just their arms, to have The Impact Bag reach me.”

Grayson says while he does not use The Impact Bag with every student he sees, he definitely uses it at least once each day. “Students see the benefit of it right away. We film the student using their own swing hitting into the impact bag and then, once we make adjustments, film them with their new swing into the impact bag. Most students see drastic changes.”

Perhaps the exasperation that so often comes with golfers’ attempts to make a swing change contributes to The Impact Bag’s value on a lesson tee. “People love to hit it,” Grayson says with a smile. “It seems to help them get rid of frustration.” 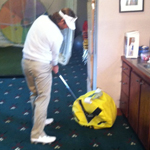 Grayson believes women experience the most success with using The Impact Bag. “It takes a bit longer for a woman to get used to the idea. They tend to be more reluctant and don’t want to really ‘pop’ it, but once they see that it is helpful, they come around.” Grayson sells it in his shop but the only promotion that the training aid receives is by being used for instruction drills. That said, he usually sells around 20 per year to students who were introduced to it during their lessons.

“The Impact Bag is a great training aid made by one of the greatest golf professionals in the history of the PGA,” says Grayson. “I would think a lot of top teachers use it, including those who work with PGA Tour players.”