CARLSBAD, Calif. (January 7, 2019) – TaylorMade Golf, the industry leader in product innovation and technology, announced today the fourth and most innovative generation of its high-performance line of M series irons. Featuring the company’s new revolutionary SPEED BRIDGE™ technology, the all-new M5 & M6 irons have been engineered to both further increase distance and enhance sound and feel.

Completely new for 2019, M5 & M6 irons with SPEED BRIDGE incorporate a high strength, mass-efficient structural beam spanning across the cavity back of the iron to connect the topline with the back bar of the iron. By connecting these specific points, TaylorMade has created a significant technological breakthrough in game improvement iron design. Through extensive use of computational modeling and optimization, the SPEED BRIDGE uses minimal mass to stabilize the iron by supporting the topline and upper face area at the exact location that vibrates at impact. The increased rigidity in the topline and upper perimeter of the face delivers improved sound and feel with increased ball speed from a more flexible Speed Pocket™. The SPEED BRIDGE is the key to unlocking the ability to design M5 and M6 irons with a thru-slot Speed Pocket, our most flexible Speed Pocket to date. With the introduction of SPEED BRIDGE, the company’s most iconic technologies have been united in perfect harmony to deliver game changing performance for players of all levels. 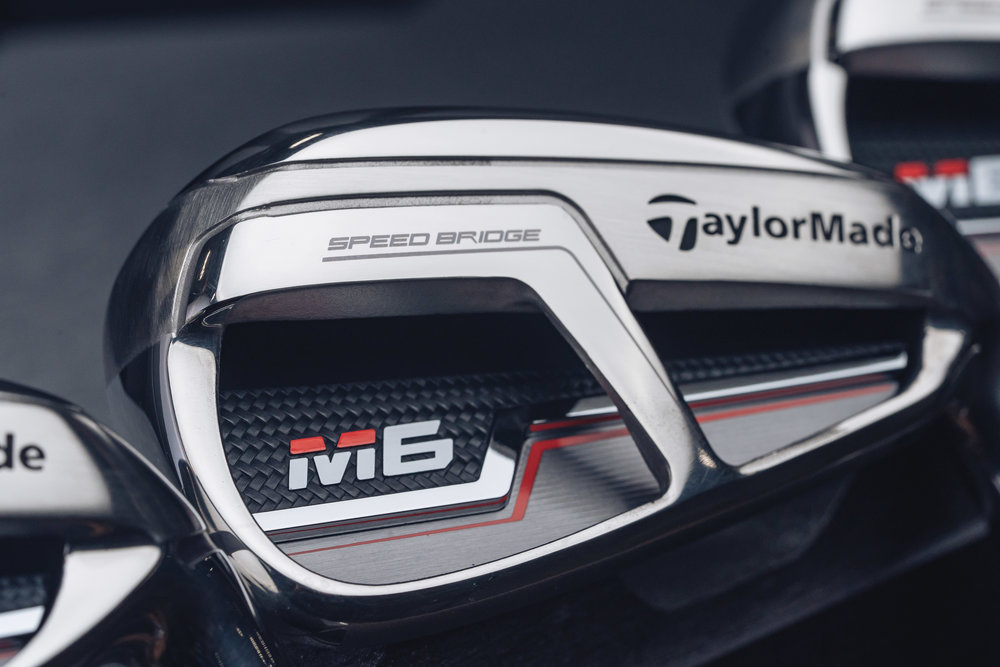 Speed Pocket technology significantly enhances face flexibility and generates optimal spin at impact, thus maximizing ball speed and carry distance; most specifically low on the clubface — where ball speed protection matters most. Thanks to the new SPEED BRIDGE construction, for the first time it is possible to design a thru-slot Speed Pocket into our M5 and M6 game improvement irons. The SPEED BRIDGE and Speed Pocket work together to systematically improve how the iron face performs during impact by shifting the point of maximum deflection lower on the face. This shift in deflection activates the Speed Pocket more efficiently delivering extreme flexibility over a large area of the face generating faster ball speeds than 2018 M3 and M4 irons.

In both the M5 & M6 irons, TaylorMade engineers have implemented a new HYBRAR damping system and multi-material badges to control and minimize vibration for a soft and solid feel. Due to the stiffer topline, the maximum point of deflection of the iron face at impact is lower than previous designs. The lower deflection point is aligned with the HYBRAR damper allowing it to activate more quickly at impact and dampen unwanted vibrations more efficiently. The ABS/aluminum structure combined with viscoelastic adhesive serves to further improve sound and feel at impact.

The 2019 M6 iron is TaylorMade’s newest and most advanced game improvement iron to date. The M6 irons feature technologies designed to offer players an outstanding combination of distance, accuracy and solid feel in a forgiving, confidence-inspiring shape that is easy to hit. Packed with industry leading game improvement technologies from TaylorMade that golfers love, the M6 iron performance has been taken to the next level with the addition of SPEED BRIDGE. The M6 iron’s SPEED BRIDGE spans across a deep undercut cavity back design for an unparalleled combination of distance and forgiveness with enhanced sound and feel in the 4-PW.

At TaylorMade, we have always strived to push the performance envelope to give players maximum distance and forgiveness in our game improvement irons. Our new SPEED BRIDGE technology allows us to do exactly that while improving sound and feel at the same time. Distance has never felt as good as it does with the M6 irons. 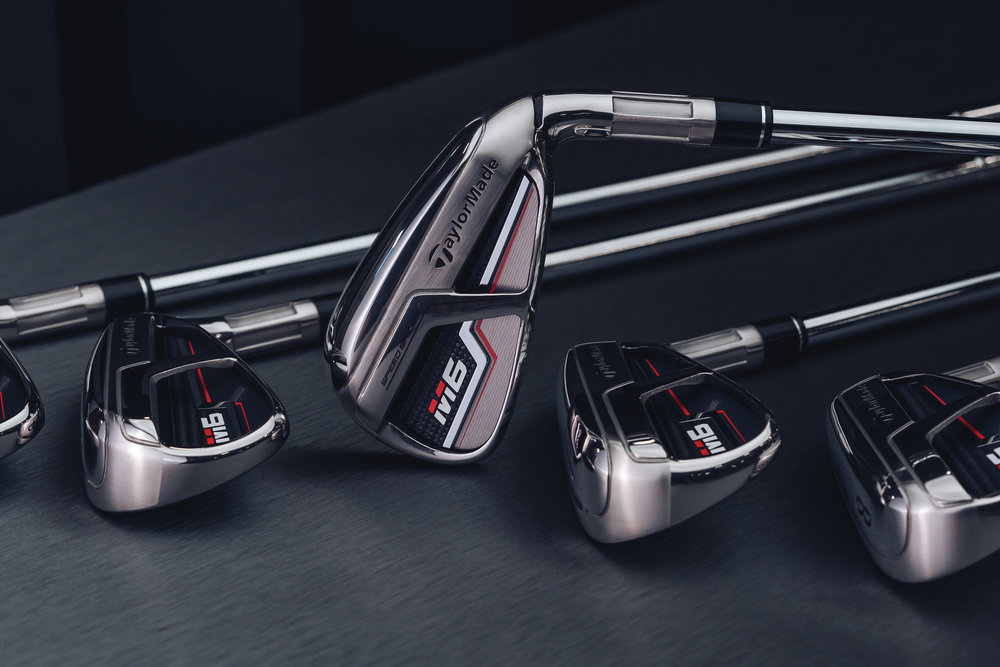 In addition to SPEED BRIDGE, the M6 iron houses several additional performance enhancing technologies. M6 iron’s extreme low center of gravity, ultra-thin face with Inverted Cone Technology (ICT), and the new thru-slot Speed Pocket have all been united by the SPEED BRIDGE to provide players with every advantage possible when they step onto the course.

An extremely low and deep center of gravity (CG) is achieved through design optimization and proven technologies such as the Fluted Hosel and 360° Undercut to harvest trapped mass from the highest location in the iron and relocate it low in the head design. This low CG design produces an efficient energy transfer at impact with a high launching, penetrating ball flight even for mis-hits low on the face. The M6 iron also has a high Moment of Inertia (MOI) for stability and forgiveness making it remarkably easy to play.

The M6 iron employs an ultra-thin face design with TaylorMade’s patented Inverted Cone Technology (ICT). An ultra-thin face allows the iron to be flexible and fast, but the secret to a truly optimized design lies within pairing a thin face with the ICT. The ICT design uses varying thicknesses to deliver maximum ball speeds over a large area face and the offcenter positioning delivers a directional bias. Simply put, the ICT gives golfers a larger and more accurate sweet spot. 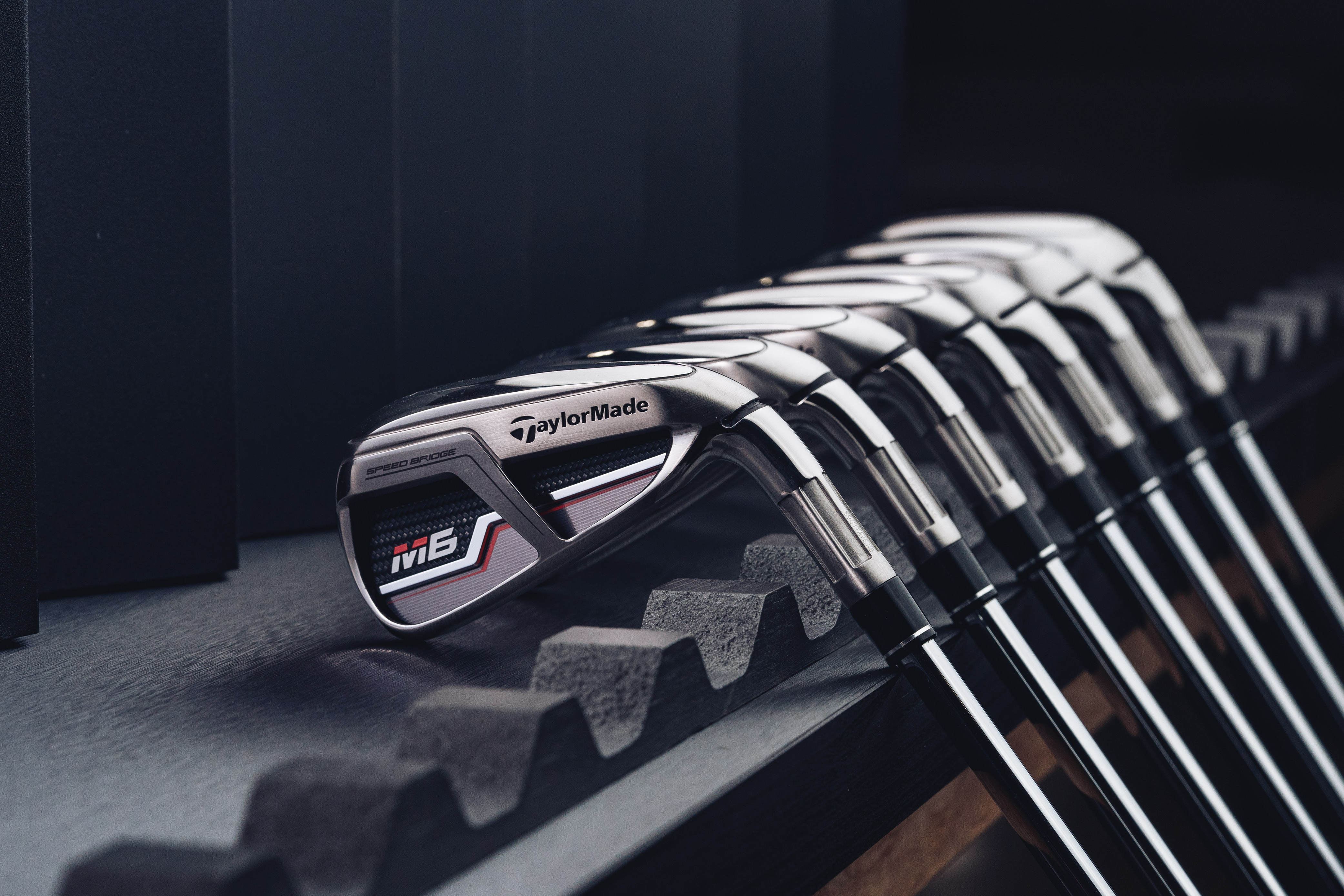 The all new SPEED BRIDGE technology is debuting for the first time in the 2019 M6 iron. As discussed in more detail above, the SPEED BRIDGE is the key to designing M6 with our most flexible Speed Pocket (4-7 irons). The SPEED BRIDGE stabilizes the upper portion of the iron in combination with the advanced HYBRAR vibration damping polymer to improve sound and feel, while the thru-slot Speed Pocket expands the flexible area of the face to generate faster ball speeds! This unique combination gives golfers the best of both worlds; an iron with game changing distance and a pleasing soft, solid feel at impact. All new set wedges specifically designed for the mid to high handicap golfer have been added to the M6 iron set for enhanced playability around the greens.

Optimized for playability and forgiveness, the 2019 M5 Irons offer players an outstanding combination of distance, accuracy and feel in a refined and aesthetically pleasing shape designed for players preferring a more traditional look. 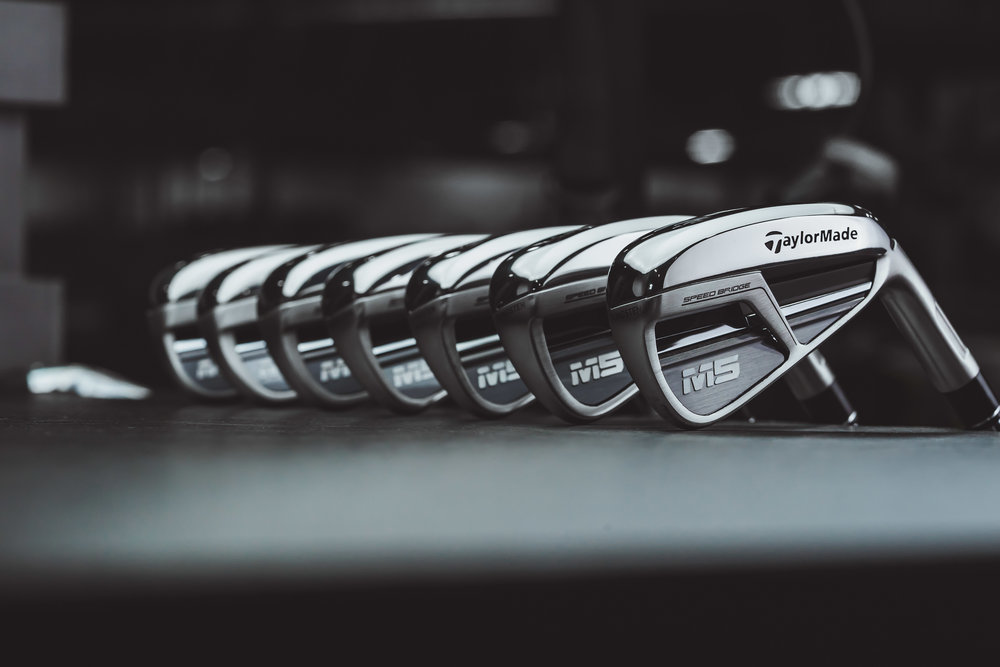 Taking M iron performance to the next level, the M5 irons utilize multi-material construction with SPEED BRIDGE technology, allowing for the integration of the most flexible thru-slot Speed Pocket in a TaylorMade game-improvement iron to date. The new Speed Pocket design (4-7 irons) uses a flexible thru-slot that result in enhanced ball speeds for more forgiveness across the face, especially on shots struck low on the face. Additionally, tungsten weighting has been added (4-7 irons) to lower the CG, increase launch and deliver additional forgiveness.

A cavity back design with deep undercut (4-PW) results in exceptional feel and enhanced shot-making ability and the aforementioned HYBRAR compression damper effectively filters unwanted face vibrations for more solid feel on all shots. The M5’s sole design now includes a leading-edge chamfer for a cleaner entry into the turf for crisp ball striking with preferred turf interaction. 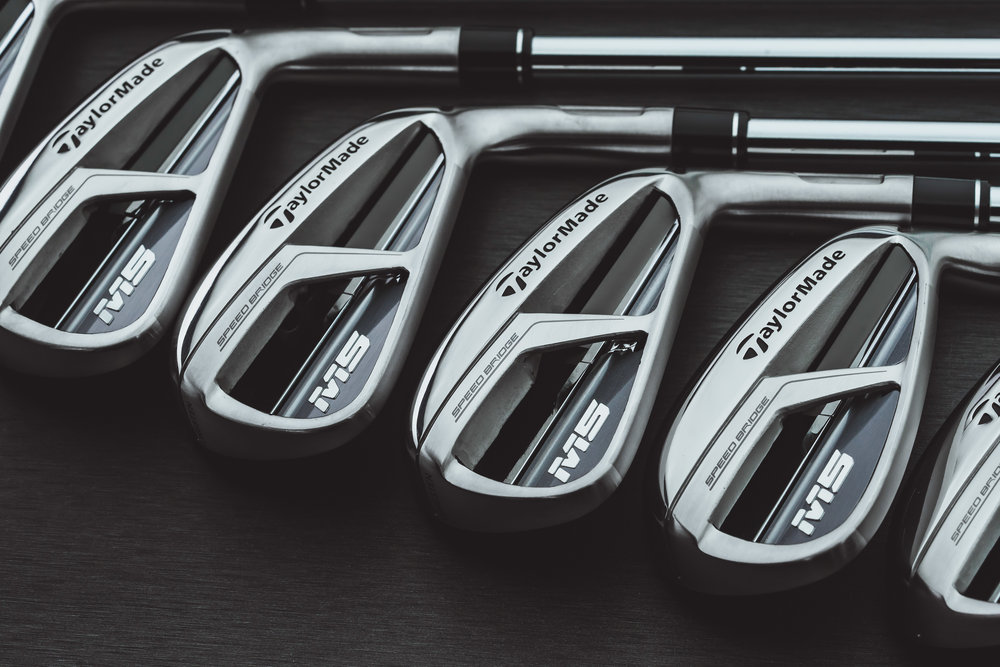 In addition to SPEED BRIDGE and the redesigned Speed Pocket, the M5 irons utilize a variety of proven TaylorMade technologies, including an off-center Inverted Cone Technology (ICT) face design to optimize ball speed across the face, 360° Undercuts with stiffening topline ribs to promote face flexibility and ball speed while maintaining sound and feel and Fluted Hosel 2.0 to promote lower and deeper CG for improved launch characteristics. Taken together, these technologies work in harmony to deliver distance, peak height and forgiveness to provide favorable launch conditions to a wide range of players. M5 has been designed for mid handicap players seeking performance but will also appeal to better players with a more discerning eye seeking a clean, compact appearance at address. 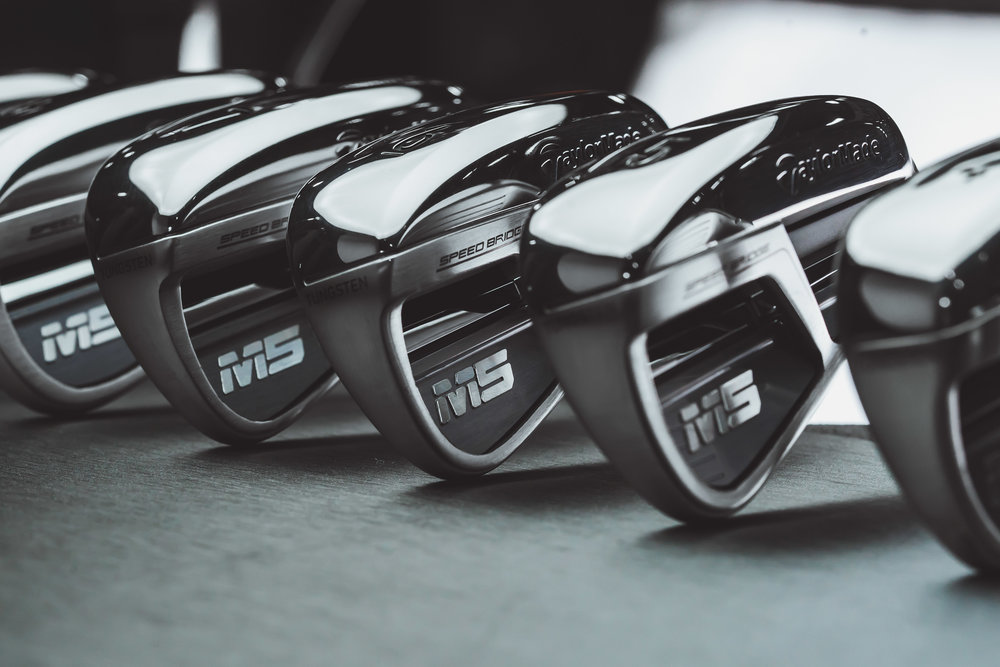