Take a Look in the Mirror

The great thing about mirrors: They don’t lie.

Vangellow uses “enough technology to be dangerous,” but does not hesitate to go back to the basics if necessary.

Video is terrific, but it is not for everyone,” says Vangellow, who’s among Golf Digest’s 50 Best Women Teachers in America. “Mirrors, especially the 360-Degree Mirror, are great for students who do not desire video analysis or are uncomfortable using tech to film their own swings. Mirrors are instant feedback and very real to people. As some of us know, the mirror doesn’t lie.”

Vangellow, who is also the national president for the LPGA’s Teaching and Club Professional Division, says that she uses the mirror mostly for pre-swing fundamentals, such as grip/set-up (face on view), golf shaft lean (face on view), posture (down the line view), distance from the handle of the golf club/golf ball (down the line view), and so on. The one thing that surprises her students most frequently when using the product is how far away from the handle of the golf club – therefore the golf ball – they are standing. 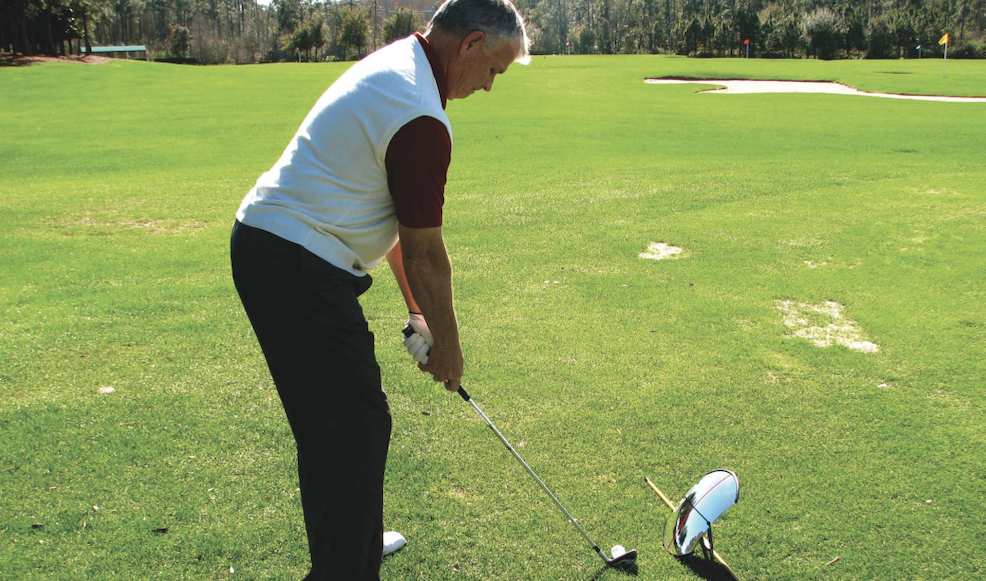 “They may feel like they are standing pretty close to the golf ball at address,” Vangellow continues. “But in actuality, most students, especially new golfers, stand too far away and reach to the ball. This is one of the best things about the 360-Degree Mirror: it allows students to easily view their posture and arm hang at address, as well as alignment with their shoulders, hips, thighs, knees and feet. They can even see takeaway and downswing positions, all with a very simple and relatively inexpensive device.”

The simplicity of the 360-Degree Mirror is also what resonates with Abrams – a disciple of Jimmy Ballard, who is well known as the instructor of touring professionals Paul Azinger, Rocco Mediate, Jesper Parnevik and others.

Ballard teaches using a common sense approach that relies on body-friendly athletic motions. It’s this same simple common sense mentality that Abrams has with his students.

“The golf swing can become overly complicated if you let it,” says Abrams, a U.S. Kids Top 50 Master Junior Teacher. “But at the root, it’s all about dynamic movement within the confines of our body. In other words, efficient and comfortable movement, which makes it easier to repeat the motion.

“A lot of times a golfer’s body is not moving the way they feel it is,” he continues. “That’s where the 360-Degree Mirror pays big dividends. The golfer can instantly see how their body moves and it gives them visual understanding of how their swing works.”

One unique drill that Abrams has his students perform using the 360-Degree Mirror is centered on proper alignment and set up prior to the shot. He places the mirror on the ground at the feet of the student with the red line pointing toward the target. The purpose is to see whether the eyes and shoulders are actually square to the target line. He then uses an alignment rod to show the student if their alignment is off .

“With today’s longer clubs and larger clubheads, it’s easy for golfers to lose track of how they’re set up relative to the target,” says Abrams. “It’s always eye-opening when I show my students just how far off target they set up. By pairing the alignment rod with the Eyeline 360-Degree Mirror, it’s easy for them to see. The red line on the mirror is pointed directly at the target, while their eyes and shoulders could be aimed 20 yards left or right.”

“The 360-Degree Mirror is especially good for position checks during the set-up and swing,” agrees Vangellow. “The mirror is a teaching aid that has withstood the test of time, and will forever be valuable for instructors and golfers practicing on their own. Without a doubt, this is one of my most utilized teaching aids in my arsenal”.

“I’ve been using the Eyeline 360-Degree Mirror ever since I first discovered at the PGA Show years ago,” says Abrams. “It’s a great fit with my teaching style, and allows my students to give themselves a checkup between lessons.”