Help golfers transition from the range to the course

Every golf coach thinks they’re a sports psychologist, and the really good ones are.” These are the words of Dr. Gregg Steinberg, a renowned mental coach for world-class athletes from various sports – including golf. Steinberg, a tenured psychology professor at Austin Peay State University, has been the mental coach for PGA Tour golfer’s Brandt Snedeker and Brian Gay in addition to contributing a weekly column on the mental game to PGATour.com.

Alison Curdt, the 2015 LPGA Teacher of the Year, well, she’s a golf coach that actually is a sports psychologist. The PGA Master Professional also has a Master’s degree in clinical psychology from Pepperdine University and is a practicing psychotherapist in the state of California.

One of America’s Top 100 Golf Teachers, Shawn Humphries, created a system for developing mental strength that’s so rocksolid that it’s been adopted by NCAA Division I golf programs across the country.

Needless to say, Curdt and Humphries are two golf coaches who are part of the “really good ones” club.

Golf Range Magazineapproached each of these experts with a simple question: How do you help golfers (or athletes in general) turn practice into performance? We hope the following article helps you join the “really good ones” club.

WHY DO GOLFERS STRUGGLE WITH ON-COURSE PERFORMANCE?

You’ve seen them before, they’re likely scattered throughout your lesson book: The range golfer. During practice sessions they can’t miss an 8-iron and the drives are fairly straight. But when they get to the course 95 is as good as it gets.

They have the talent, ability and knowledge to perform, but something blocks them from transferring their golf game from the range to the course. What’s the cause?

As an instructor, determining why this happens is the first step to finding a solution. We spoke to sports psychology experts to determine the root of the all-to-common occurrence. 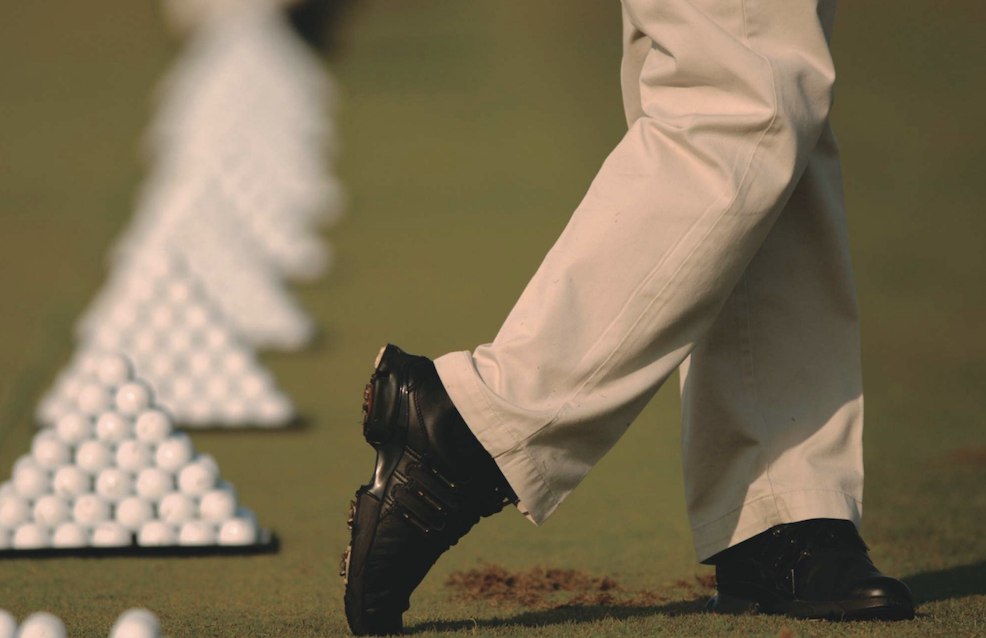 When most people practice they don’t put any pressure on themselves, they don’t place any emphasis on the outcome. Then when they get to the golf course, not even competition just to the course, there’s an outcome. They have to actually complete the hole, they have to record a score. That’s partially why skill transfer varies.

Then there are also physiological factors. When there’s outcome and competition, the body reacts to the added pressure. Muscles tighten up; the grip on the club gets tighter. With a heightened focus, one bad shot can lead to doubt and a downward spiral. But on the range, there’s less pressure, less tension in the muscles and more fluidity. One bad shot doesn’t lead to intense doubt. You can just reload. So there’s no downward spiral in terms of the mental game, there’s no loss of confidence.

At its core, what really hinders people from transferring skills from the range to the course is performance anxiety – which is a trait that can show up in other parts of life. Taking a test in school even though you know you’ve studied; giving a presentation at work you know you’re prepared for but are still nervous about; public speaking even though you memorized every line of your speech.

It’s the fear of looking incompetent. You go into any performance situation and you want to demonstrate your competence. The fear of not living up to your own expectation, or the expectations of others, creates anxiety – which leads to muscle tension and physiological impacts.

Practice situations aren’t fully applicable to what golfers find on course. On the range things are static. Lies are flat and the elements are contained (wind direction, target placements and distances). The repetition on the range isn’t anything like what we do when we’re actually performing. On the course or in competition we only get one chance, to hit one shot, to one target. But on the range, we have a pile of balls right there and we have essentially a bunch of do-overs. To put it plainly, the practice environment is significantly different from the competition environment and that spurs different mindsets for golfers.

Another element of regressed on-course performance is social comparison, or the judgment factor. This is particularly true among new golfers, who don’t want to play with experienced players because they fear being perceived as “less than.” We all have intentionality with how we present ourselves to the world. If we’re engaged with golf or any sport, we tend to think our performance is somehow a reflection of who we are as a person. That can be very unhealthy. The healthy way of approaching it is to be able to separate yourself from your golf game. Our scores do not reflect to the type of people we are, just the number of times we hit the golf ball.

STRATEGIES FOR TURNING PRACTICE INTO PERFORMANCE

If you’re going to change performance, you have to change your self-image. What is “self-image?” It’s the perception you have of yourself, and what makes you act like you in any given situation. For example, if a longtime 18 handicap shoots 40 on the front nine there’s a high probability that they’ll revert and shoot 50 on the back. Why? Their self-image adjusts, they begin thinking “it’s not like me to shoot back-to-back 40s,” so that becomes a reality.

A big part of what we do with the Elite Performance System that’s been adopted by multiple NCAA Division I golf programs including the University of Cincinnati and Dartmouth College, is centralized on self-image. We teach golfers how to protect it, grow it and train it through the “principle of reinforcement,” which we define as “what you think about, talk about and write about increases the probability of that thing happening.”

So despite the outcome of a particular round of golf or training session, we teach the students to focus on the positive occurrences. You rarely hear high-level athletes talk about having a poor performance, it’s like they have selective memory. Listen to post-round interviews from the best PGA Tour golfers, they’re always focused on what they did well that day. How many times have you heard professional golfers say “I’m really close,” even if they just shot a 76.

To help with the reinforcement process, we use a performance analysis system that allows our golfers to document their actions daily, weekly, monthly, quarterly and yearly. Some people refer it as a journal, but it’s more than that. The book is designed specifically for them. It has the date, where the action took place (training or competition), weather and conditions, what they did well, what they learned and what solutions they need to put in place to perform better. By writing out the things they did well on a daily basis, they build their self-image through consistent reinforcement.

The main thing I do with all my players in require them to create a pre-shot routine. It seems simple, but it’s the most effective way to create consistent performance on the practice tee and on the course.

I call it a “force field,” in that the pressure bounces off. What does that mean? It’s almost a trance-like state where outside variables disappear as the player begins to focus only on the act of executing the shot. It gets them into a relaxed state and allows them to visualize the shot, which inspires confidence. It also creates rhythm; it’s like a melody for the mind and body. There’s a tempo to it. All those things help the golfer deal with the pressure of performing.

When golfers practice, often pressure is absent. They just go bam bam bam! One ball after another. Then on the course, all of a sudden, there’s a new element of pressure introduced. In order to really prepare to play golf, golfers also have to practice on the range with pressure. Some ways to do that are visualizing a tight fairway on the range, then challenging a buddy to see who can hit the most fairways out of 10. It’s not just stepping up and hitting it, the golfer must create a whole situation.

Within that, the golfer needs to go through their pre-shot routine before hitting each shot.

I encourage my students to get on the course and practice. Not keeping score, or a stroke play round, but hitting shots from different lies and different situations and dropping multiple balls down. It’s the experience of incorporating a lot of different factors that are faced during competition.

Other sports do it really well. Scrimmages in basketball. Preseason games in baseball or football. So all other sports create environments of simulated competition. Golf needs to do that, as well.

Try to be cognizant of your student’s personality traits. Are the an A-Type personality that’s confident in everything they do in life, or are they more sensitive and cautious with their approach? These things weigh into how you can teach someone the game, and most importantly for the sake of this topic, help you evaluate why your student may be struggling to transfer their golf game from the range to the course. Is it anxiety based, is it fear based, is it lack of skills? It’s different for everyone, and getting to know your students personality will help you determine why he or she is struggling.

Core psychology skills are learnable and can be trained, just like an in-to-out swing path can be trained. It’s just not as observable for most people. Students see instant results when they start swinging from the inside with a square face at impact: They see better drives flying down the range. But with mental training, the influence is a lot slower and takes a longer period of time. You don’t get the instant results. It might come six or 12 months later. It’s important for you and your students to realize that. Dr. Steve Bucky: I primarily work with professional football (Los Angeles Chargers) and baseball (San Diego Padres) players, but the core principles of sports psychology can be relative for any physical activity that’s performance based. The athletes I see do everything that’s needed to be in prime physical shape, and we’re starting to see that more and more in golf as well. However, golf is a particularly high-level mental game. It can be easy to become distracted for a split second over the course of five hours, but there is so little room for error.

The most important thing for competitive golfers is creating a consistent way to prepare. You don’t want your students approaching the game differently from day to day – that can lead to lapses in mental strength and instability. There’s no magical way of performing well, it takes commitment. That’s true for both the physical and mental aspects of any sport. The routine is important, and it starts even before they reach the golf course. Routines will vary from person to person, there’s no right answer for everybody.

These routines develop over time, and should be well planned out and not made up on the fly. That type of stability helps the golfer feel like they’re in control, and that’s an important part of the process.