-Press Release, Franklin, Tenn.
The zSeries Tour Limited is a new exclusive series designed to offer the SeeMore loyalist and new fans alike a completely new look while still remaining true to the core benefits of RifleScope Technology. The zSeries comes in several exciting options in both a blade and mallet design. Each zSeries Tour Limited head is 100% milled in the USA from 303 stainless steel with milling patterns designed for the ultimate feel and roll.

The zSeries Tour Limited heads offer the golfer a variety of sole weight options including 2 milled aluminum and 2 milled stainless custom heel and toe weights with each putter, which will allow the golfer to fine tune and customize swing weight, feel, and toe release patterns. Each owner of a zSeries Tour Limited putter will also be informed of new options to be created in the future for additional customization options.SeeMore Putter Institute
SeeMore has launched the SeeMore Putting system to golfers in the form of introducing the SeeMore Putter Institute (SPi), where golfers and instructors will be able to come together in person and online to share these fundamental ideas about how to improve putting performance. In its first year over 215 global instructors are utilizing SPi to generate more lessons, more revenue and more game improvement!SPi is a learning system based on the simple fundamentals of finding the proper grip, alignment, stance, and posture. This allows for a natural, free, and simple putting stroke on each and every putt. It is based on the technology built into the SeeMore putter itself, and on the refined teachings of SeeMore Global Ambassador Pat O’Brien – putting instructor to Zach Johnson, and many other top PGA Tour and developing players. O’Brien has been teaching the SeeMore System around the world for more than 12 years, ever since he watched his good friend, the late Payne Stewart benefit from the SeeMore putting system to win 1999 US Open and lead the tour in putting statistics that year.

Becoming SPi Certified will help golf teachers formulate a complete teaching plan to help their existing students and recruit new students to become great putters using the SeeMore system that has won 2 Major Championships and set numerous putting records on the PGA Tour. It is a complete game plan, which will give any golf instructor a new level of confidence in the proper teaching and fitting involved in putting instruction. Becoming certified to teach the system initially consists of online training, but also includes personal coaching.

RST Technology
SeeMore’s patented RST, known by a visible gun sight on the top line, allows the golfer to set up the putter perfectly each and every time in relation to the intended target line. This is accomplished by lining up the black bottom portion of the shaft between two white lines and covering a signature red dot on the heel of the top line. The process is like locking radar onto a target. The two parallel white sight lines frame the shaft and serve as an indicator that the golfer is in perfect position to make a consistent and reliable stroke.

About SeeMore
SeeMore originally became recognized when Payne Stewart won the 1999 U.S. Open playing a SeeMore putter in the greatest final round putting performance in US Open History. The brand was re-launched in 2007, and immediately regained worldwide prominence as Zach Johnson used a SeeMore FGP to win the 2007 Masters. SeeMore’s website at www.seemore.com andhttp://www.seemoreputtersblog.com has many new features about SeeMore’s remarkable legacy, technology, and tour success. SeeMore putters are custom made in Franklin, Tenn. 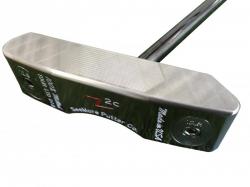 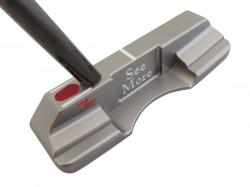 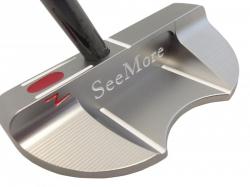 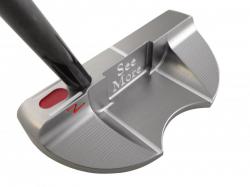