Needing a practice complex that would satisfy tour players competing in the Travelers Championship, Tom DeGrandi and his colleagues at TPC River Highlands went all out

Tom DeGrandi guarded a secret for years. Each summer, the longtime superintendent of TPC River Highlands would struggle to mask the truth about the PGA Tour stop he and his colleagues worked so hard to refine and took such pride in. “The PGA tour players loved our golf course,” DeGrandi can now say plainly. “They hated the practice area.”

In his office overlooking No. 10 fairway, DeGrandi took time on a recent afternoon to recall difficult days at the Cromwell, Conn., home of the PGA Tour Travelers Championship. Yes, this venue has hosted back-to-back wins by Phil Mickelson, first-place finishes by Greg Norman and Nick Price and even Bubba Watson’s maiden tour victory, back in 2010.

However, it was a “sad but true fact,” in DeGrandi’s words, that the portion of the facility touring pros spend the most time on was woefully sub-standard. What passed for a range at TPC River Highlands was so inadequate that some players would skip the event outright.

But those dark days for DeGrandi are long since over. The practice facility he now dotes on is considered one of the finest on the PGA Tour. In 2006, the old was out and the new was ushered in at River Highlands. That year, to great acclaim, new practice grounds opened up, built on an abandoned sand pit that had not been part of the existing River Highlands property. 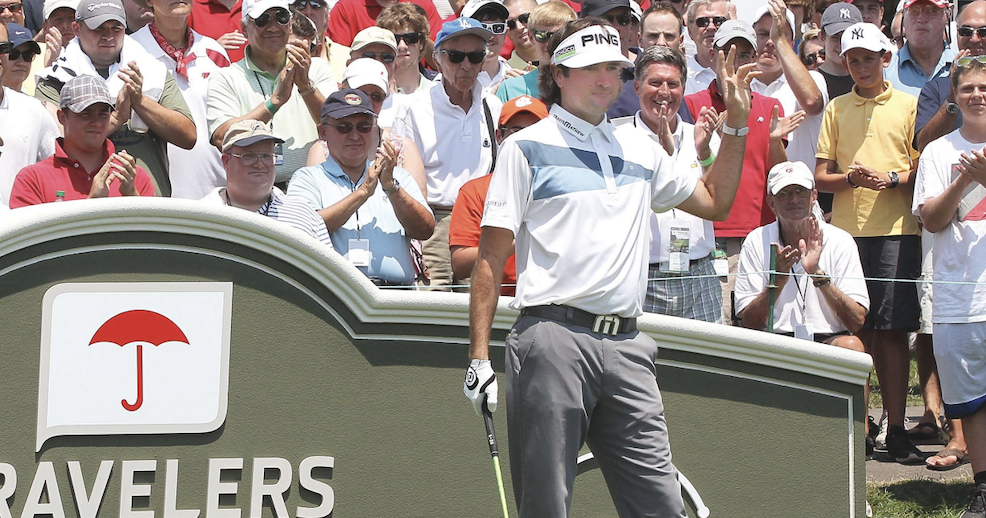 The entire new practice complex covers 23 acres. To put that in perspective, the fairways of the 18-hole River Highlands golf course total 25 acres. Today, these practice tees look like they could land an Airbus SuperJumbo. The chipping green allows players to hone multiple shots off assorted angles and lies from up to 60 yards away. The new putting green looks large enough to host a company picnic for one of the Hartford insurance giants that use this PGA Tour venue for relationship-building.

DeGrandi realizes the importance of the facility for the tour pros. “They’re not just playing golf, they’re working. Practice is work for these players–they’re honing their craft,” DeGrandi says. “For that reason, they expect turf conditions just like what’s out on the golf course. We stimp the practice greens every morning. We cut the grass on them the same as out on the course: a 21-inch collar on the greens, cut at an inch and a quarter. The rough is the same height, whether you’re playing or practicing.”

A before-and-after for the parameters of this range complex shows how dramatically it’s been improved. Formerly, golfers jockeyed for space on 15,000-square-foot practice tee. After the overhaul, some 110,000 square feet of tee space became available. The old range’s landing area had three target greens on a cramped parcel that was too short for many players to hit driver. The new landing area is 350 yards long with nine separate target greens. At the old chipping area you found one tiny green, one bunker, no fairway-length turf. Now what awaits is an 8,000-square-foot green with multiple bunkers and a 60-yard-long fairway. The old putting green, for sensible reasons, is still in service, but it’s complemented by a new one that came along to more than double the size of River Highlands’ putting practice space.

It’s not only the Tour players who love the improvement, but club members, as well. With the old range, there were two tees. The top portion was 10,000 square feet and the lower segment about half that size. Every year, five weeks before the Tour rolled into town, the top tee was shut down to keep it in perfect shape for the pros. The small tee would be worn out by the members well before the first PGA pro launched a practice ball. With the new facility, members get to hit off perfect turf every time they are on the range, all year long. The new facility has also helped increase membership. “We’ve got people who join just for the practice area,” DeGrandi says. In fact, some don’t want to play the course, just become a practice facility member, but River Highlands doesn’t offer that option.

DeGrandi maintains the PF with the same size crew he did the old practice area, a testament to the efficiency of his talented staff. The new teeing ground is nothing short of perfect, 100 percent manicured bentgrass. “We treat it like a fairway,” DeGrandi says. “We topdress and overseed.”

The key to managing the new tee is to treat it like the old one, apparently. “If you get a big practice tee, think of it like a small one,” says the superintendent. In other words, confine hitting to a narrow band at any given time, rather than be overly generous with that day’s allotment of turf. “ I’d say we made that mistake in the first season,” DeGrandi recalls. “What we learned is: Don’t get carried away. Building a big tee means you have more days to give them new turf, not more space each individual day.”

DeGrandi changed his management strategy and now, as he did with the old practice tee, rotates the hitting areas regularly, but makes sure the space is no more than is needed for a day’s worth of shots. In the fall when practicing decreases, the ropes are not repositioned as frequently. DeGrandi or his staff regularly checks the range to make sure the hitting area for that day is not covering too large of an expanse. It is set up by the golf shop staff.

DeGrandi says he has a specific progression to how he rotates the hitting zone. He might begin the year, for instance, working down the entire left side of the tee, from front to back. When that is finished, he moves to the far right until that is used up, then back to the left, inside of the previous area. Because of the space at his disposal, DeGrandi can now reserve the prime practice location—front and center— for the River Highlands annual member-guest, a wonderful favor he was never, in the past, able to bestow.

One issue DeGrandi has with the range is the driving acumen of the kids behind the wheel of the ball picker, which leaves him shaking his head. In an effort to reduce the amount of golf balls that need to be retrieved by hand, they try to get as close to the practice green flagsticks as possible with the cart. Unfortunately, they miss the mark on a regular basis and snap the poles, which cost $25 each The River Highlands members and Tour pros owe an indirect thanks to John Daly. It was Long John’s prowess with the driver that alerted tour brass to the need for a new Cromwell range. One afternoon in the early 2000s, during tournament week, DeGrandi stood on No. 17 green with tour rules official Mark Russell. Some 375 yards away, Daly was on the practice tee that sits 40 feet above the 17th. One of his drives hit the roof of a skybox beyond the end of the range, bounced over the narrow neck of the fairway leading to the 17th green, landed on the putting surface and rolled into the pond as DeGrandi and Russell watched.

It was then they realized the range was inadequate. “Now, every player can hit the water on the fly,” DeGrandi says. With new acreage and a more refined practice layout came additional maintenance demands, though DeGrandi says he doesn’t mind the added effort required. “It’s been fun but it has its challenges,” he says. There was also a learning curve. One supposedly well-conceived plan, in particular, did not work as hoped. To the right of the landing area is a steep wall that was planted with low-maintenance grasses as recommended by an agronomist and designed to go un – mowed, adding color and texture to the area.

Unfortunately, no one factored in the prevailing wind, left to right, plus the natural slicing tendency of most golfers, also left to right. The result was near-catastrophic loss of inventory.

“We had to cut all the grass down because we were losing thousands of golf balls, thousands,” DeGrandi says. The new facility doesn’t just serve tour players and club members. One component of it is a four-hole short course that is home to the Connecticut First Tee. The Brad Booth-Brad Faxon architecture firm designed the layout. DeGrandi’s staff maintains this, as well. The fairways are bluegrass and the greens Vesper Velvet bentgrass. Inputs of chemicals and fertilizers are minimal. The area is mowed regularly, but not to the same specifications of the 18-hole course, since the players are mostly beginners.

Unless they are members of The First Tee, River Highlands members don’t have access to the course. DeGrandi and his crew, though, get out and play now and again and they have a blast, he is quick to note. They even came up with their own course, teeing it up all over the layout while playing to the four greens for impromptu matches. “We’ve invented nine holes,” DeGrandi explains. A superintendent running a course and practice facility of this scale, to the highest industry standards, indeed must be inventive. There’s no secret about that.