Do you ever see the symptoms of golfers not having fun while they’re practicing at your facility? They can include unused piles of range balls, abandoned after a session of aimlessly hitting balls into the distance, or golfers halfheartedly one -handing putts across the practice green, or even – worst of all – golfers leaving the range and not returning.

At The Golf Range Association of America, we believe that ranges and practice facilities are essential to the growth of the game, and we have the prescription to giving your members and customers the tools they need to get more out of their practice sessions and enjoy the game more. On the following pages, you will find a fun assortment of range games that will have your customers smiling – and coming back for more. We reached out to golf professionals and range operators from across the country to ask what games they suggest to their customers and students to help them enjoy their time on the range. The games they shared are all different, but share some common traits:

Of course, the benefit to golf facilities is that a happy customer tends to frequent the facility more often. Whether that means a club member retaining or upgrading a membership, recruiting a new member, or a range customer buying a bucket of balls and a lesson, customer engagement often leads to benefits across the bottom line. Happy customers play more often, and they tend to stick around for lunch or dinner, spend more money in the golf shop, spend money on lessons, and other golf related items. These 10 range games that we’ve collected for you can be used in a variety of ways. You might want to think about using some of them on a regular or rotating basis, or as a “game of the week” or “game of the month” promotion. You can also involve your teaching staff in the game-playing process, either by having them explain the games on the range or by participating in the games with your players. In fact, some of these games would work very well in a “Beat the Pro” setting.

Take a look at these 10 games to beat the boring golf blues, and see if the result is healthier business for you and your facility.

Mayer and her staff use colorful tape to outline a 3 x 3 grid on the practice green that serves as the board for a putting-based game of Tic-Tac-Toe. Students are separated into two teams: Xs and Os. The teams then take turns putting, trying to get a ball in three squares in a row – just like in the traditional paper-based version of the game. In a twist on the traditional version of Tic-Tac-Toe, Mayer’s players can knock another team’s ball out of a square. She also adjusts the starting point for players’ putts based on ability, and can also change the size of the grid to accommodate players of different skill levels. Mayer calls Tic-Tac-Toe “a simple way to have fun while learning touch and alignment.” 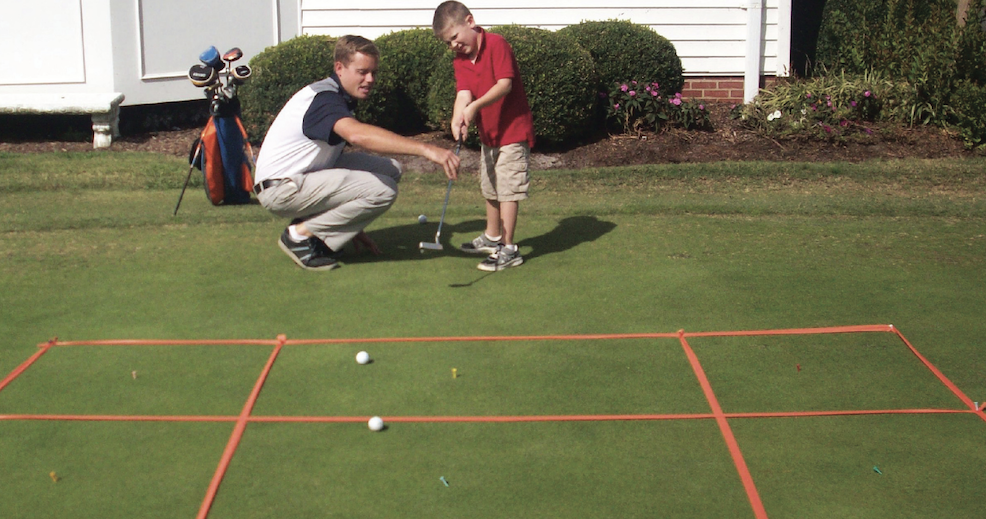 Merion Golf Club makes game night part of its member-guest event, and creative games on the range are par for the course. In the past, the staff has had a variation on the Big Breakstyle glass panes to break – with wrapping paper used for safety and ease of assembly – along with a hockey net and mannequin goalie as a target for the club’s many Philadelphia Flyers fans. This year, the club’s assistant professionals had the idea to fill colorful balloons with helium and hang them over the practice range for target practice. Balloons were floated at 75, 100, 125 and 150 yards, with the heights of each balloon matched to the apex of the trajectory for different irons. For example, the 100- yard balloon was the perfect height for most players’ 7-iron shots. Balloons were floated on the range, then over the first fairway, with golfers allowed to take as many shots at the colorful targets as they wanted. Members and their guests loved the challenge of matching the height, trajectory and straightness of their shots to the balloons. “It was just for fun, but I can see how there could be all kinds of applications for games and competitions with the balloons,” Nye says. “You could put points on different balloons for a game, or sell sponsorships of the balloons or range balls. The bottom line is that it was a lot of fun – it looked like the county fair out on the range.”

This putting practice game is a lot like playing “PIG” or “HORSE” on the basketball court. Using a point system, players have to score exactly seven points to win the game, and the game can be played by two or more golfers. The first player chooses a hole on the practice green and the length of the putt. If a player makes the putt, they get two points – and if no one makes the putt on the first try, closest to the hole gets a single point. The players then proceed to hole out: Two putts is zero points, three putts or more are a negative point. The player who gets to exactly seven points first wins the game. This easy and fun game is great for juniors, but adults also love it as a way to sharpen their short games and have fun before or after a round.

Facilities with TrackMan launch monitors often use them for clubfitting and teaching, but they can also be set up to play TrackMan the Game, which combines hitting golf balls with video game-like features. At Miles of Golf, a series of targets downrange are shown on a monitor in the hitting area. The golfer hits shots toward the targets, and the TrackMan monitor records how close each shot finished to the target. Players can keep track of their own record through a website, and they can also challenge other golfers to TrackMan the Game showdowns. “We have golfers who play against their friends at different times and different days – you can post your score on Thursday morning before work, and your friend can play Sunday afternoon or whenever it fits in his schedule,” Davis says. The Miles of Golf range is open 24 hours a day, and the TrackMan the Game dedicated area has self-serve monitors so golfers can play any time of the day or night. Customers can play TrackMan the Game for a $20 monthly fee at Miles of Golf, or for a $40 fee they can play the game and get $30 in range ball credit. The facility has nearly 100 members in the TrackMan the Game program, and it continues to grow. Other range facilities have similar game programs with launch monitors from Foresight Sports and Ernest Sports.

This chipping game encourages creativity and performance under pressure for two players. The first player drops two balls off the green, then picks a target hole on the green. He or she chips both balls at the target. The second player then drops their balls in the same area and hits at the same target. If one of your shots is closest to the hole, you get one point. If both of your shots are closest to the hole, you get three points. And if a player holes a shot, they get five points. Honors are given to the player with the most points from the previous target – they chose the target and play first. First player to 11 points wins the game.

This simple but addictive idea is essentially target practice for customers at Broadway Driving Range. Wednesdays are Blue Barrel Nights at Broadway Driving Range, and the staff places a large blue barrel on the range – usually the distance is 50 yards from the hitting line, though the position does move from week to week. Competitors are given the chance to hit a shot at the Blue Barrel, and the rules are simple: If the ball goes into the barrel and stays, then the golfer gets a $20 gift card. There’s no cost to participate, but Blue Barrel Nights draw traffic and attention to the range, and encourage golfers to practice their short pitch shots for a chance at winning the prize. Broadway Driving Range recently added this event to their schedule from 6:30–8 p.m. each Wednesday, and it reports good success and participation thus far.

Poison is a popular putting game with junior camps at Tilden Park, though it could make a fun and competitive game on any practice green. Setup for the game involves placing two ball-shaped tee markers approximately 20–25 feet apart on the putting surface. Each player starts by dropping their ball from waist high on top of the first tee marker, then they play their ball from where it settles. Taking turns, each player attempts to putt their ball to the second tee marker – a turn ends when you miss your target. When a player hits the second marker, they get another turn and try to putt back to the first tee marker. Once a player has hit both tee markers, they become “poison” and try to eliminate the other players by hitting their balls. If anyone putts off the green or putts away from the targets to play safe, they are eliminated. Last player alive wins the game. This game gives players a chance to hit a number of putts in different directions on the practice green, and also gives them a chance to play with some competitive pressure – and it’s a lot of fun for all skill levels.

The facility has a pair of square nets that are set at distances between 40 and 60 yards. Golfers are given a goal of hitting 10 shots at each target, keeping track of how many shots they hit into the nets. Players use the targets as a way to calibrate their pitch shots before rounds, and to gauge their improvement throughout the season. The game also gives Weekapaug’s staff a chance to ask players how their short game is doing, leading to more lessons. The nets provide instant feedback, and are a popular practice target for members.

Short Game Match Play is a favorite game with elite juniors at Troon North. Players are paired up, then they go to the practice green with a golf ball and their short game clubs. Standing in the middle of the green, one player tosses the ball in any direction. Both players then play match play from that location – no mater what the lie. The players alternate going first, and can toss the ball in whatever direction or into whatever kind of lie they choose. This teaches young golfers how to deal with any lie and how to perform under competitive pressure. They also learn how club selection around the green can affect their shots, and they learn to focus on one shot at a time. While Troon North uses this game primarily with juniors, it can be great fun for golfers of any age and skill level.

A pair of two-by-fours are placed a foot apart in front of a tee marker. Players putt the first ball through the two-by-fours as far as they can without going off the green. Each putt after that must stop short of the previous putt. As soon as a player hits a putt that goes farther than their previous putt, those two balls are picked up – the number of balls remaining on the green is counted as that player’s score. Kreis says this is a great game because it can be played by multiple golfers as a game with friends, or by a single player trying to beat their best score.