Proper Hydration and Diet Before, During and After Your Round 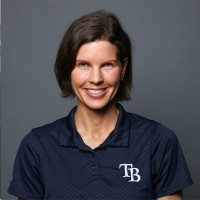 “Proper nutrition for golfers is crucial to maintain energy levels and focus on the course. After all, 18 holes of golf takes at least four hours, and fueling efficiently can make as big a difference as that previous lesson or extra bucket of balls on the range,” say Ryan Harmon, a board-certified dietitian in Windermere, Florida.

Harmon spent several years working with the Tampa Bay Rays baseball team, and more recently, she has been collaborating with the South Florida PGA Section to educate its PGA Professionals, and help them share the benefits of proper hydration and nutrition with their many golf students.

Properly preparing your body is actually about two things – hydration and diet. “Nothing is going to help an athlete more than hydration and nutrition on the golf course,” Harmon stated. Poor energy levels affect strength, stamina and focus, opening the door to a plethora of potential mistakes. Energy deficiency can also lead to jitters, shakiness and a focus placed on your hunger, rather than performance. When it comes to highly-skilled golfers, they’ve already put the time and effort into their golf skills. So, the differentiating factor can often be how prepared their bodies are for the grind that day.

“Fueling starts early, especially hydration,” Harmon advises. “You don’t want to be playing catch-up once you arrive at the course. Drinking water is generally best, and sixteen ounces upon waking is a good start.” Harmon advises her athletes to put a glass or bottle of water near their bed before going to sleep so it’s right there when they wake up. 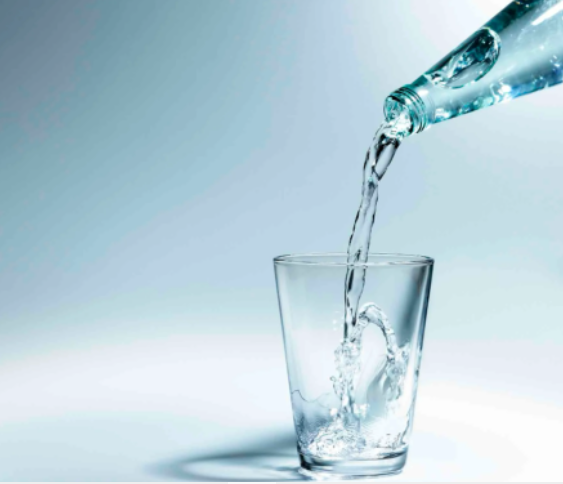 When asked if a cup of coffee before a round of golf was counterproductive to her message, Harmon had this to say, “From my experience, golfers who are used to consuming coffee in their daily lives may need that cup of coffee in the morning. Caffeine can reduce feelings of fatigue, as long as it’s consumed in moderate amounts. It can also aid in focus and performance, provided it’s not loaded with sugar. It’s not as dehydrating as an alcoholic beverage, so I’m not opposed to anyone having coffee before a round.”

During a round there are many factors that might dictate how frequently you drink, but Harmon, who bases many of her suggestions upon the American College of Sports Medicine guidelines, says you should generally drink 5-8 ounces of fluid every 15 minutes – essentially every hole or two. 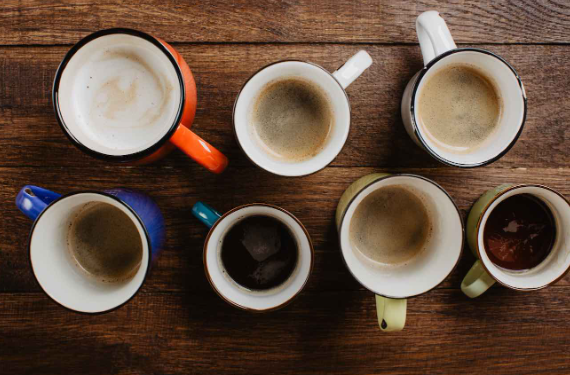 “Golfers can get their fluid from water and their electrolytes from snacks. But, if they are a salty sweater or it’s extremely humid and we’re going to see higher sweat rates, then I would probably add an electrolyte packet to the bottle of water,” Harmon explained. “And to be clear, electrolytes are the sodium, potassium, magnesium and calcium (among other nutrients) lost in sweat.” Following this process will ensure an athlete is extremely well-hydrated.

In addition, golfers should pay attention to the color of their urine. Generally, clear urine indicates sufficient hydration, but one must ensure they are not over-hydrating and depleting their electrolytes, causing cramping during play and the frequent need for the restroom. “It’s an effective way to see how well-hydrated one maintains him or herself during a round of golf,” she adds. “I always tell my athletes to monitor the color of their urine because it will trigger the thought, ‘Am I drinking enough water?’”

This is where consuming electrolytes is vital, whether through food or a powder added to water, or both. “In fact, the whole purpose of electrolytes is to maintain the balance of fluids in the body, while retaining body water. It has other functions, as well, but for golfers who must maintain their hydration during a 4+ hour round of golf, the importance of electrolytes is often overlooked. If you are well-hydrated, drinking fluid and electrolytes, you’re not going to be running to the bathroom even half as often. Your body will retain its water better and you’ll maintain your hydration with fewer trips to the restroom.” 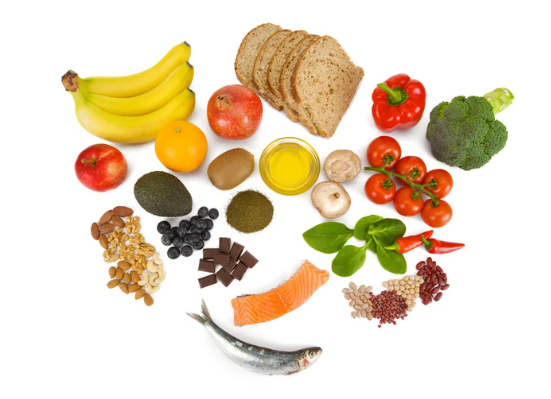 Once the round of golf is over, recovery is important, as well. “It becomes even more important if the golfer is in the middle of a tournament and they have another round tomorrow to prepare for,” she highlighted. “Upon finishing a round, the golfer should drink 16-24 ounces of water per pound of body weight lost, if that number is determinable.”

In addition to proper hydration, adequate fueling is essential to maximize performance on the golf course. Ideally, you are hydrating upon waking to kickstart the process, and also making time for something to eat.

“This could be something that the golfer made the night before – something like overnight oats, a delicious snack that is like ‘oatmeal in a jar.’ It’s chilled and can be combined with fresh fruits, like berries,” Harmon shared. 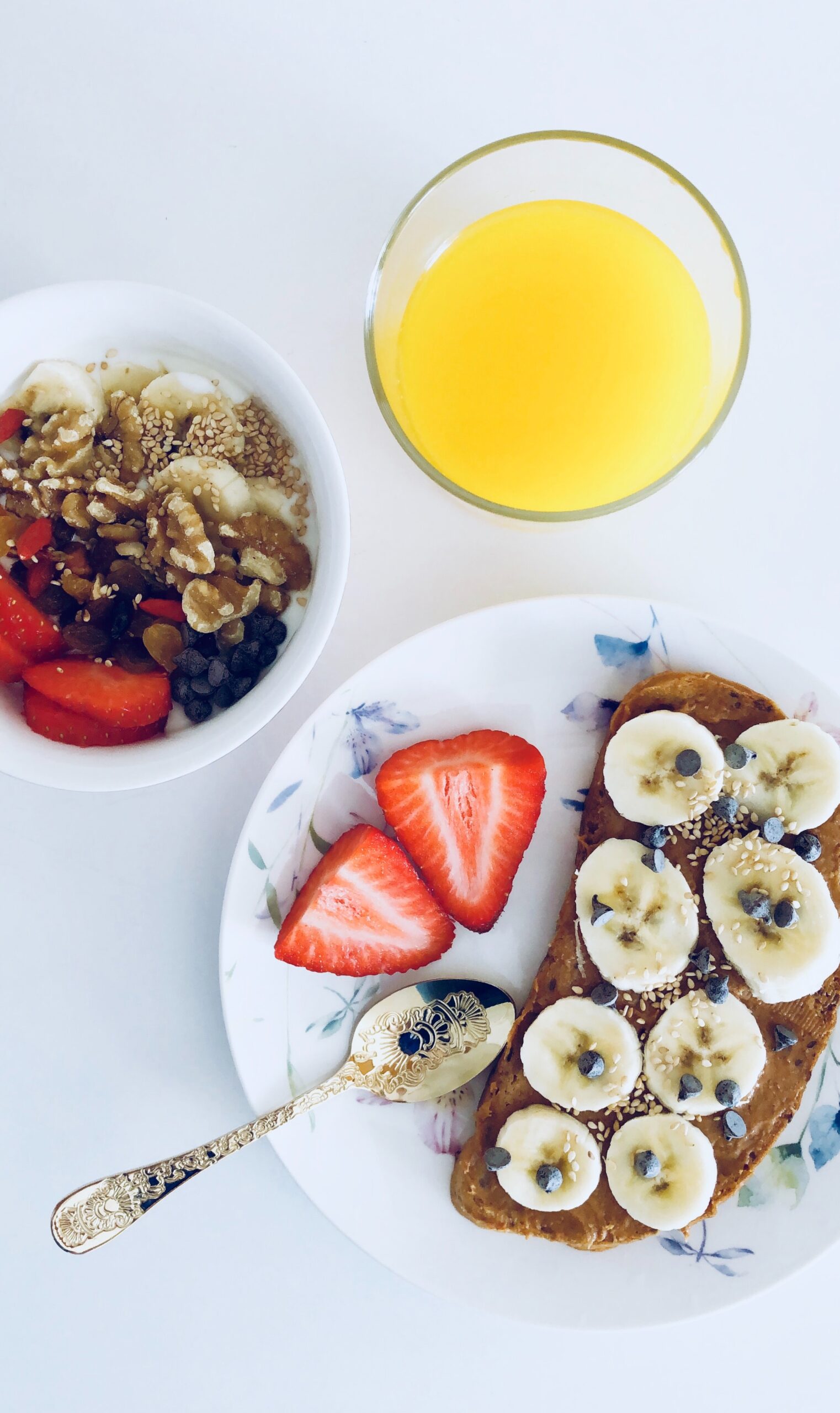 She recommends adding some low-fat Greek yogurt or a side of scrambled eggs as a lean source of protein, as it takes a lot of energy for the body to break down animal fat, making us feel tired for at least a couple of hours – not the way you want to start your next round of golf. Plant fats such as avocado, nuts and seeds are acceptable additions to a pre-round meal, and can support satiety, while stabilizing blood glucose levels.

“You want your meal to be high in protein, as protein is important for satiety (helps keep us full). Then you want a low glycemic index (GI) carbohydrate, which is a carbohydrate that is high in fiber, so it doesn’t spike insulin and blood glucose. For instance, eating something sugary, like a pastry, would spike our blood glucose, giving us a bunch of energy for a short period of time, causing an energy crash and a steep decline in performance. What we want to see is a carbohydrate that is high in fiber that will slowly increase blood glucose and keep it stable,” Harmon describes. If we can keep our energy level stable in the body, that’s when we see our best performance. We don’t want it spiking and falling.” 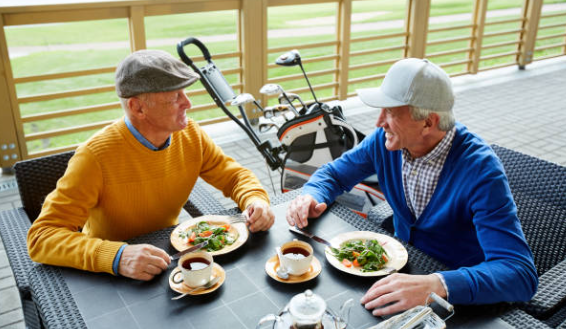 On the course, golfers should eat every three or four holes. The snack choices may differ greatly based on personal preference. But to maximize performance and maintain energy, so that you’re not feeling hungry, Harmon says there should be two things in the snack – a lean protein source and a low GI carbohydrate, like fruits or vegetables. “The point of this,” Harmon explains, “is that your lean protein takes a long time to digest, satisfying your hunger, and the fiber in produce will maintain your energy levels by keeping blood glucose stable. Protein is for satiety, and carbs are your fuel.”

Bananas are a great snack, as is a high-quality 100 percent grass-fed jerky with less than five grams of sugar. One is giving you the carbs you need, and the other is giving you protein. Other options could be cheese sticks or an individual pack of almond butter, which you can squeeze onto a banana. Plant fats are less worrisome than animal fats, and produce is important because fruit is hydrating and gives you a lot of good fiber, which stabilizes blood glucose. You’re also regaining potassium and sodium, two of the primary electrolytes that an athlete sweats out. 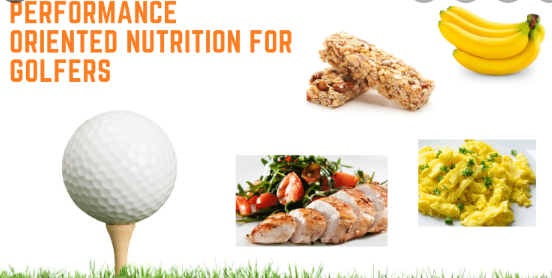 In this case, water would be a sufficient beverage since the athlete is getting his or her electrolytes through the snacks and food eaten before and during the round. In the absence of such food, electrolytes should be added through hydration.

Recovery is crucial, however, and preparation for your next day’s round starts as today’s ends. Harmon adds, “If you’re not going to have a meal within an hour of completing your round, then grabbing a snack is essential. After all, it’s right after we’re finished training when our muscles are most ready for good nutrition, allowing the rebuilding and repairing process to start. In addition, our glycogen (stored carbohydrates) levels are depleted, and that replenishment is not only based on what you eat, but when. The sooner you start refueling after a golf round, the better you will be the following day.” 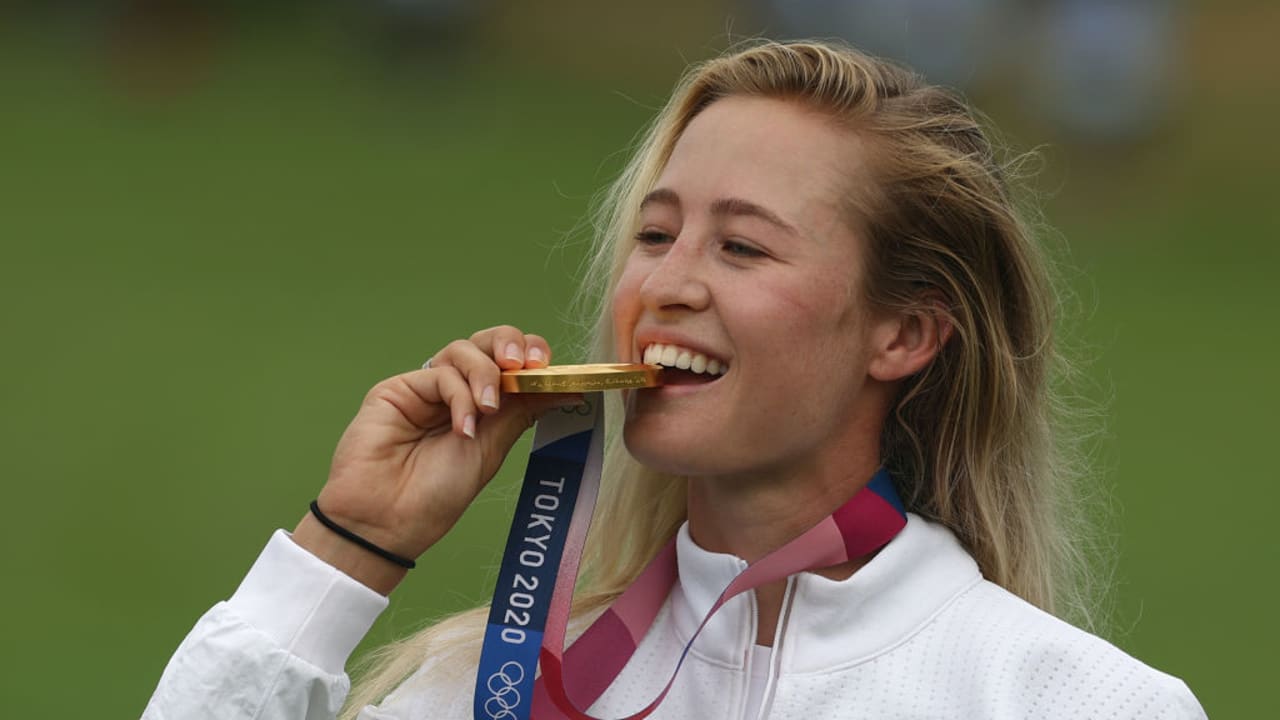 The human body is a complex machine, and proper maintenance takes a good deal of strategy and consideration. Think about all the time you spend taking lessons and honing your skills at the range. The tips and guidance Ryan Harmon is providing here is as valuable, if not more, on tournament day, as the swing enhancements you’ve put in place with your PGA Professional.

For the everyday golfer at the country club or local public course, this hydration and dietary information can help you get that handicap to levels you had always hoped for, but haven’t yet achieved. And if it gives you an edge over your buddies, save the bagel or burger for the office on Monday and fuel your body for maximum performance this weekend. 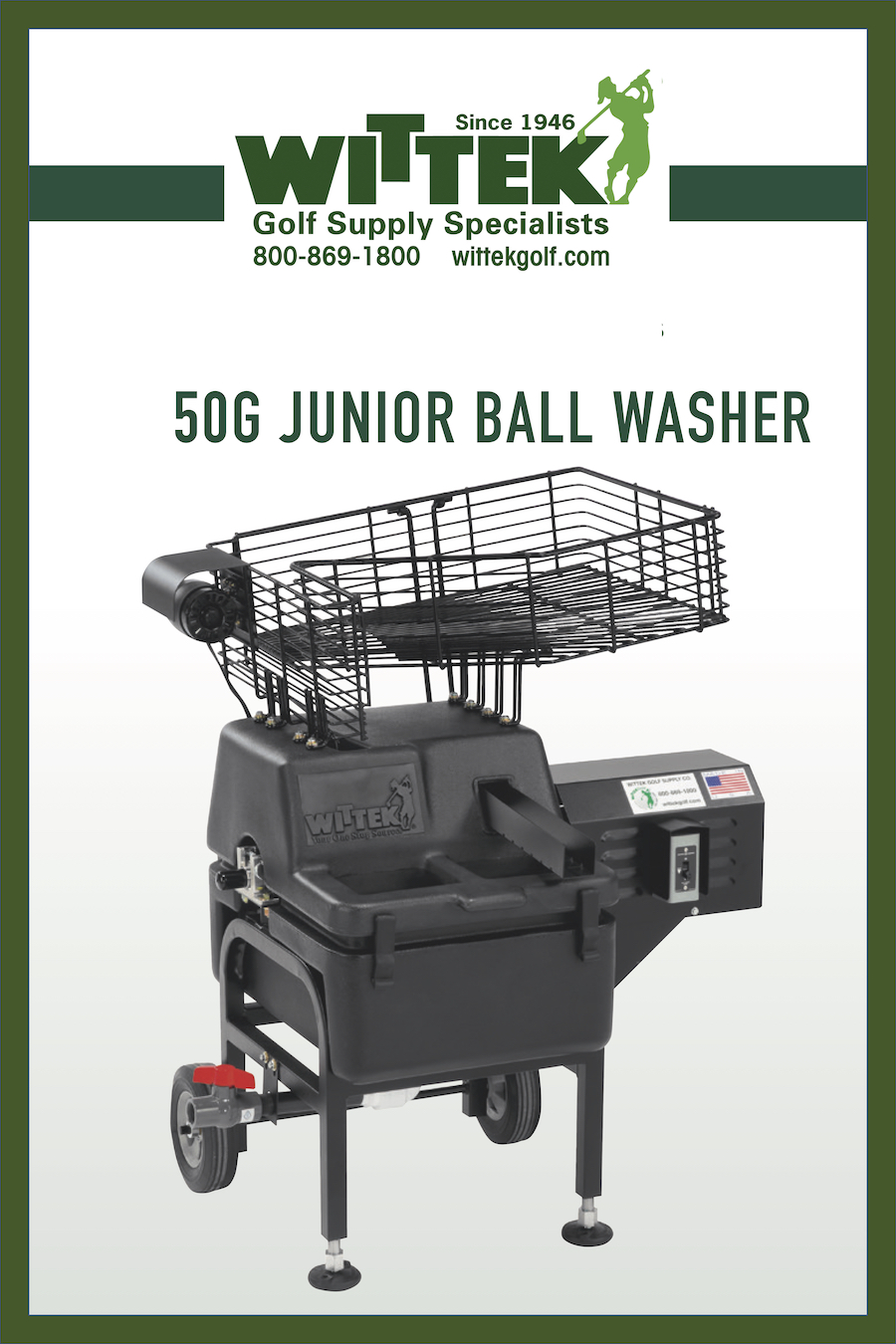