The long-hitting Cameron Champ first turned heads with his dazzling U.S. Open performance at Erin Hills in 2017, when as an amateur he and playing partner Xander Schauffele both vaulted to 5-under-par and two off the lead through 36.

After ultimately settling for a tie for 32, the Sacramento, California, native went on to win in his rookie season on tour in 2018-19 at the Sanderson Farms Championship.

GRM spotted Champ at the BMW Championship at Medinah this year doing a unique drill on the range with an alignment stick planted straight out of the ground, 20 feet in front of him. He then proceeded to hit balls around the stick. At one point he hit the stick directly and swing coach Sean Foley reacted excitably.

“Wow, that must have hurt coming in at 190 mile per hour ball speed!”

That’s where we begin with the 24-year-old. 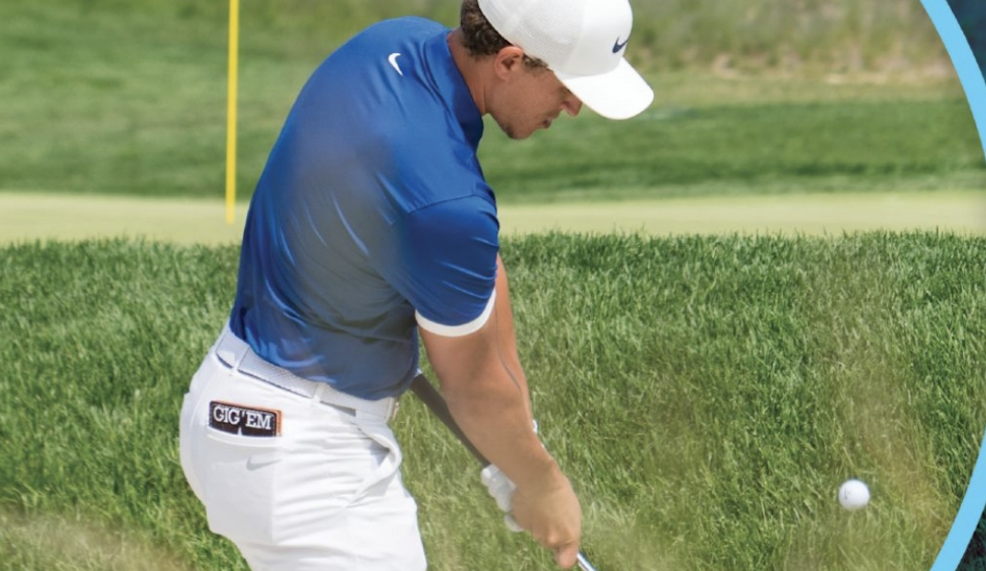 GRM:We see you set up an alignment stick about 20 feet in front of you as a training aide on the range sometimes. What does that help with.

Champ: It’s something we’ve always done. We just set it up sometimes to where I finish left of it, kind of hitting baby cuts with the driver. My miss sometimes is to hit shots off the toe, so it just gets me moving more left and basically through the ball at impact.

GRM: What other go-to drills do you have as you warm up on the range?

CC: I don’t really do any drills in warm up. We do minimal balls – only maybe 30 balls there total. I just go hit balls about 30 minutes before my tee time.

Like four diamonds out there, with six balls and then six extra for the driver.

GRM: What feel do you want to get out of it?

CC: Naturally I’m trying to get the feel of hitting my cut, but to try to enforce so much stuff before your round, there’s really no point. Like Justin Thomas said, he felt he hit balls the worst he’s ever hit it and then shot 7-under on Thursday at the BMW Championship.

So I just kind of treat it as a warm up and obviously feel my feels, but if I’m not doing it then I finish out and know what I’m working on and what I’m doing.

GRM: What about the practice green and chipping?

CC: I’ll putt for 20 minutes and set up a few drills. Hit some lag putts; a lot of basic stuff.

Out here the rough around the greens is pretty thick, so I’ll spend more time practicing those shots. That’s what I did before my second round at BMW.

Then hit a few bunkers for about 20 minutes. Then head to the range and hit those thirty balls.

GRM: Tell us about your putting drills.

CC: I use the mirror, we have a mat that paces the stroke and it has a line on it and shows you where your stroke is supposed to be.

I’ll putt a few on that and then on the mirror, just to make sure my eye line is where it needs to be, I know where my ball position is and where my hands actually are. So that kind of gives me all the feedback I need.

GRM: As you get later in season, do you cut down on your warm up time on the range?

CC: It used to be longer but I cut it down to about an hour. There’s no point in sitting there for about an hour and 20 minutes like I used to do.

I cut it down by 20 minutes in the last few weeks. Just don’t want to overdo it.

GRM: Where do amateur golfers want to be mentally as they leave the practice area and head to the first tee?

CC: It’s about finding confidence in yourself. If you have a bad warm-up, that’s going to happen sometimes. It even happens to JT and players at the highest level. If your speed is off in your swing, don’t worry. It may be just jitters or it may be stress in your life, you showed up late to the course, etc. There are a lot of things that go along with it. Don’t beat yourself up.

Everyone acts like we come out here and we’re all happy-go-lucky and everything is perfect in our lives, but that’s not the case with most of us. For me personally, I try to focus on the things that I’m doing and look at the future and realize that today is today and it’s not going to determine who I am or anything like that.

That’s something that I’ve had to learn as I go, but I think it’s helped me along the way.