Warming up to play the 2015 Champions Tour’s Bass Pro Shops Legends of Golf tournament at Top of the Rock Golf Course, Jim Thorpe turned to Lee Trevino and asked who designed the one-acre, multitiered and very undulating putting green directly behind them. Without missing a beat, Trevino quipped “Ray Charles.”

Inspired by St. Andrews’ Himalayas putting course in Scotland, it was actually designed by eight-time major champion Tom Watson. The impressive complex has an 18-foot elevation change from top to bottom, countless mounds and about 20 cups. Golfers can actually take 200-foot putts, and balls falling off the lower end can roll right down into a lake.

In late May, just a month after the Champions Tour event, that same lake was almost swallowed up when several sinkholes suddenly formed. Collectively an estimated 80-foot-wide by 35-footdeep portion of the range was damaged. While the entire course and the part of the range furthest from the sinkhole remained open for use by golfers with tee times only, the putting green has been temporarily closed. Officials are scrambling to find out what caused the sinkhole and how to remedy the situation, as a geophysical study is being conducted to see what’s below the surface. Some local experts suspect a cave system underneath the course may be the cause. In addition, there had been heavy rainfall in the area in the weeks leading up to the sinkhole. 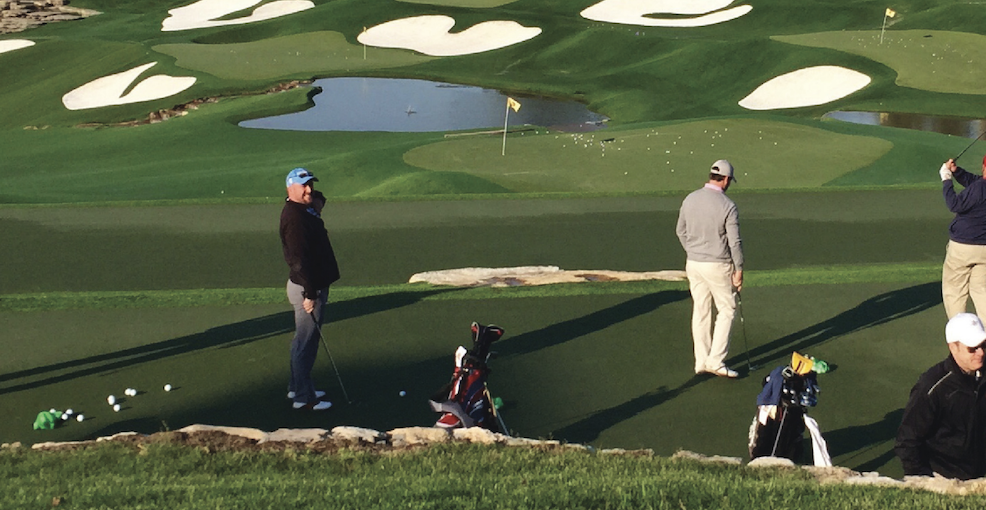 “Sinkholes are common in the Missouri Ozarks due to the Karst topography geologic landscape, which is formed from the dissolution of limestone and other soluble rocks,” says Michelle Wait, PR director of Big Cedar Lodge, which includes the golf facility. “They were immediately reported to the Missouri Department of Natural Resources. The Bass Pro Shops team is working with the Department of Natural Resources Geological Survey team to perform a geological assessment of the sinkhole area and to study the underneath formation. The engineering team is now performing a study of the area to determine stability around the sinkhole and to immediately initiate safety measures. We don’t have an expected end date of the study at this point.”

After roping off the affected area, facility officials got back to work. In fact, over the Memorial Day weekend that followed the sinkhole, there wasn’t one tee time missed. When fully functioning, Top of the Rock’s range has 16 target greens, waterfalls, a lake and is lit for nighttime use. The entirely artificial-turf Arnold Palmer Driving Range has been open since June 2014, the same time the nine-hole Jack Nicklaus Signature par3 course was unveiled for the Champions Tour event. The course shares the event with its sister course Buffalo Ridge, which is an upscale, fulllength venue a few miles away and also owned by billionaire Johnny Morris, the founder of Bass Pro Shops.

The range attracts every golfer who plays this course,” says Eric Smith, PGA director of golf at Top of the Rock. “And some unbelievable golfers say it’s the best range they’ve ever seen. When the tour pros are out there taking pictures of the range and saying it’s the best range they’ve ever been to, I think it’s pretty good. “Some people come just to hit balls. Others come for dinner in our restaurant and go down to the range to hit balls. If anyone’s in the area wanting to hit balls, they come here.”

Champions Tour pro and former Masters winner Larry Mize agrees. “It’s neat, it’s pretty and it adds to the uniqueness of Top of the Rock. I haven’t seen anything else like it,” he says. “You’ve got so many targets, too. I’ve noticed way down to the left end of the range, you can hit anything you want.” Unlike probably any other driving range you’ve ever experienced, this one looks so inviting and pristine that customers are frequently deceived. “People are blown away at how much it looks like a course,” says Smith. “They walk into the golf shop and mistake it for the course. We get it all the time – they’ll ask ‘how do you play this course?’ And we have to tell them that it’s actually the driving range.” For now, the sinkhole serves as an eyesore. But news agencies report that once geologists finish their study and determine it’s safe, the sinkholes can be filled up within two weeks.