This month’s top-rated training aid has a cool name and a colorful look. It’s also highly functional –and more versatile the more you use it

Jim Hackenberg, a PGA Professional in the Carolinas PGA Section and owner of Jimmy Hack Golf LLC, invented The Orange Whip Swing Trainer while teaching and after a stint as a caddie on the PGA Tour. Hackenberg discovered from watching the best, and teaching his students, that golfers made the most drastic improvements by improving their motion, or rather their rhythm, while maintaining proper balance.

Hackenberg created his now widely used training aid in order for golfers to feel and learn the proper motion in the golf swing. “I wanted a device that would provide golfers with dynamic feedback, helping them to feel their body swinging in a tour pro motion,” says Hackenberg. The device has received tremendous feedback from top PGA golf instructors and teachers from around the nation, which is why The Orange Whip Swing Trainer placed as the No. 2 teaching and training aid on our inaugural list of Top 25. The Orange Whip product line includes The Orange Whip Swing Trainer, which at 47.5 inches in length, is designed for men and taller women; The Orange Whip Golden measures 44 inches long and is designed for those under 5’6”, including men, women, seniors and juniors; and The Orange Whip Hickory, which is 38 inches long and designed for youth golfers between the ages of 7 and 12.

Here’s a look at how two well-known and successful golf instructors use The Orange Whip to improve their students’ swings.

The key for any successful teaching and training aid is simplicity. A good product often doesn’t require a lot of set up or an understanding of difficult concepts. It simply shows a student exactly what the swing should look and/or feel like. Such is the case with The Orange Whip Swing Trainer, which placed second on the GRAA’s Teaching & Training Aids Survey. The philosophy behind PGA Professional Jim Hackenberg’s development of The Orange Whip was to take the focus away from trying to achieve various club positions during the swing or trying to hit the ball. Instead, he wanted the student to simply focus on the motion of the swing, and the results spoke for themselves. “For some reason, it might just be the more weighted club, The Orange Whip really encourages the proper swing plane,” says PGA Master Professional Andy Hilts. “Perhaps it also has something to do with not worrying about getting the ball airborne.” 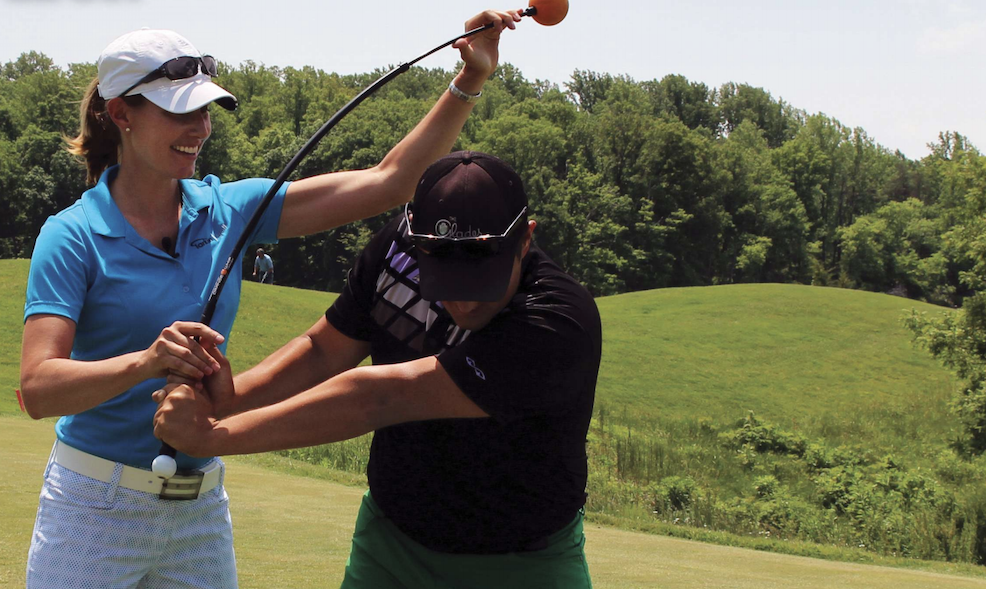 Swing plane improvement was not the first benefit thought of by Hackenberg when he developed the Orange Whip. It’s main focus was improving swing tempo and developing strength and flexibility. However, if there is one thing PGA Professionals know, it is how to find unintended benefits to help their students’ games. “Golf pro ingenuity!” Hilts exclaims, chuckling. “We are resourceful enough to figure out new ways to use every product. Even if it means using it the same way it was designed and just recognizing added benefits.”

Hilts does not use The Orange Whip in any radical way. He just has his students swing it to loosen up and to get a feel for where and how the club should travel throughout the course of the swing. “I have always been fascinated by how different people learn,” says Hilts. “The more skilled players generally have a better spatial awareness and can feelthe difference in their swing when swinging with The Orange Whip. Higher-handicappers might not feel the difference, but once we put their normal swing on video and compare it to their swing with The Orange Whip, everyone can visually see the change.”

Another big appeal of The Orange Whip is the ability to use it indoors or outdoors. Hilts sees a lot of people purchase the training aid who are looking for something they can use to improve while indoors. Hilts is in a unique position. As vice president of instruction at GolfTEC Headquarters, not only does he give lessons, he’s also responsible for training and mentoring the 650 GolfTEC coaches at more than 190 locations worldwide. In fact, it was one of the GolfTEC coaches who first showed Hilts The Orange Whip after the inventor, Hackenberg, had given it to the coach to try.

Each golf coach hired has to go through GolfTEC University where, among other exercises, they spend half of a day strictly on training aids and how to use them. “It’s often the GolfTEC coaches who discover useful training aids and share them with my team at GolfTEC HQ,” says Hilts.

“The Orange Whip is a great product, but we don’t try to oversell it. We limit big posters to try and keep the look and feel of our Improvement Centers as clean as possible,” Hilts says. “Within the lessons it is promoted, but we don’t highlight it over another product. We have 20-25 required training aids that must be in each center and The Orange Whip is on the list.” The Orange Whip comes in three sizes. Essentially it covers, taller, smaller and junior players. Hilts believes that as long as you have the right size, it is beneficial to all players. “This is a great training aid for virtually anyone,” he comments. “Aside from the obvious tempo benefits it’s also a good way to loosen up quickly before a round and get your body turning.”

Hilts uses the product about once per day. He has many clients use it every day and others who have not yet used it. Knowing the student and what will best help their game dictates what specific training aid he recommends. But those whom he does hand it to see immediate results.

“Obviously, students are skeptical that a stick with an orange on the end of it can help their golf swing,” he jokes. “But once they feel the connection in their swing, the rhythm, tempo, and actually see it on video, the benefits become clear to them.” Hilts lauds The Orange Whip for its simplicity. “The more convoluted the training aid, the less likely I am to use it. With The Orange Whip, as long as you have enough room to use it, you just pick it up and swing.” Even though GolfTEC does not focus on promoting training aids, Hilts does not play down the importance of them in instruction.

“Honestly, I shake my head when I hear people say ‘I don’t need training aids to teach.’ Well, you may not, but your clients very well might!” he exclaims. “There certainly are people I don’t use any aids with. But if there is a student who can reach their goals quicker, then I am all for using the appropriate tool. Whatever it takes to have our students reach their goals. And if they want to buy the training aid after we use it in the lesson, then we have the one they are going to need.” Even if the one they need is a simple whippy stick with an orange on the end of it.

When Erika Larkin first saw The Orange Whip Swing Trainer four years ago, she was attending a teaching seminar. Jim Hackenberg, a PGA Professional and the inventor of The Orange Whip, was at the conference to show golf instructors his new training aid, then still in beta form. “I went through the demo and was impressed,” recalls Larkin. “But I’m not a very frequent user of full-swing training aids, so I didn’t purchase one on the spot,” says Larkin. A few months later, Larkin found herself trying out The Orange Whip Swing Trainer at another seminar for teaching professionals. After speaking further with Hackenberg she placed an order for two.

The proof of any swing aid is in the usage, and Larkin surprised herself in that regard. She found herself using The Orange Whip on a fairly regular basis—more frequently than any of the other teaching and training aids she keeps in her arsenal. “I found that I could use The Orange Whip for a variety of different issues that some of my students were facing,” Larkin explains. “As a training tool it’s really versatile and very effective.” Larkin has used The Orange Whip to help students combat overswinging, casting the club, coming over the top, quick tempo, an incomplete shoulder turn, tightness, and poor footwork and balance, among other problems.

“This is one training aid that really allows the student to feel what they may be doing incorrectly in their swings,” says Larkin. “For example, it’s very useful for students that have frequent issues with coming over the top on their downswing. In these instances, I try to always use the longest Orange Whip because it exaggerates the improper ‘loopy’ motion in their swings.” Of course, The Orange Whip Swing Trainer’s standard length of 47.5 inches will not work for everyone, especially petite golfers or youth golfers. In these cases, Larkin does keep shorter versions of the Orange Whip at her academy. Larkin also encourages her students to use The Orange Whip to warm up prior to practicing on the range or teeing it up for a round of golf.

“It’s not only good for their tempo, but it really helps them stretch the proper muscles out before hitting any actual golf balls,” says Larkin.

Larkin seems to never use the device just one time during a session. Rather, she will have a student swing The Orange Whip for a couple of minutes, hit some balls, go back to swinging The Orange Whip, and then return to ball-hitting. By doing this, Larkin finds, the student is able to ingrain what The Orange Whip is teaching into their muscle memory.

She makes a point of saying that the primary value of The Orange Whip Swing Trainer is based on the student’s feelings. When students use the training aid, there is no pressure to hit an actual golf shot; it’s very un-intimidating in that respect. She adds that The Orange Whip works well for all types of students, whether they are beginners, advanced players, men, women, seniors or juniors. Because her students like using The Orange Whip so much, Larkin has had success selling the product to them. Larkin is a distributor for Orange Whip and has sold 75 units to her students either in person or online. For students who choose to purchase the product via the web, Larkin gives them a coupon code specific to her account that shaves $10 off their total price. While it’s generally more lucrative to sell the product from her academy with the markup (MSRP of $109.99), she does receive a commission of sorts from each purchase she is responsible for that comes in via the Internet. While sales of The Orange Whip provide Larkin a nice revenue bump, it’s not her main motive. “The students want to buy it; I don’t use the hard sell on them,” laughs Larkin. “In fact, I have noticed other golfers who are not my students at my facility who have The Orange Whip in their bags, so clearly the word gets around quickly.” Larkin has been using The Orange Whip Swing Trainer for the better part of three years now and has absolutely no plans to put it aside. “Everyone seems to benefit from The Orange Whip and they all certainly have nice swings while swinging it,” says Larkin.