Impressive in his mix of brawn and brains, former long-driving professional Liam Mucklow is becoming an influential leader of the increasingly science-based practice of golf instruction

Delivering a podium presentation at the World Scientific Congress of Golf is a task usually reserved for Ph.D holders. In September, the restlessly curious Liam Mucklow—who has the letters “PGA” after his name and a mere bachelor’s degree in biomechanics on the resume—will break from that pattern. The founder of suburban Toronto’s state-of-the-art Golf Lab will stand before the gathered intelligentsia down in Australia and describe his “Technology based Learning Model for Self-Guided Improvement.” Those who know the 33-year-old Mucklow figure he will knock this presentation long and straight.

The son of a science professor, Mucklow is best known for having designed and founded The Golf Lab, then built the 26,000-square-foot facility into a $2 million-a-year business. Golfers who frequent this performance palace in Vaughn, Ont., get their fitness evaluated via TPI screens and the efficiency of their swing motions scoped out by AMM 3D body mapping. Trackman monitors are deployed to measure patterns in club delivery and ball flight. SAM PuttLab is used to measure changes in putting stroke parameters and the SAM Balance Lab is used to get exact readings of ground-force reactions. Liam sometimes uses the phrase “Mucklow-metrics” to describe the un-fuzzy approach he and his Golf Lab associates have developed to help clients.

Outside on the bentgrass surface of your choice, he is a tireless teacher of Aim-point, the scientific approach to green-reading. In 2014 alone Mucklow is scheduled to conduct 30-plus Aim-point clinics across Canada and various U.S. venues. If you know the ShotByShot platform, with its intensely logical and number-based way of understanding how golf scores truly are compiled, you won’t be surprised to know that Mucklow has employed this system of analysis for years. “Lately I have been adding Game Golf to what we do with ShotByShot,” he says, referring to the new GPS-based hardware-software tool for automatically recording data about club used, shot distance and distance from hole that each shot comes to rest.

Reflecting on the five-year process of building and nurturing the Lab, Mucklow says he knew he wanted to offer the curious golfer “all aspects of game-improvement, from technical instruction to coaching to equipment to golf-specific fitness.” He felt that if he could provide “everything a golfer might want, other than a golf course,” and put it all under one roof, he would really have something. Visitors tend to be duly impressed. In June, one of Canada’s wealthiest industrialists flew Mucklow to Florida to have him conceptualize a “Golf Lab South” as part of a sprawling tract that will be developed for golf, housing and other amenitized activities. 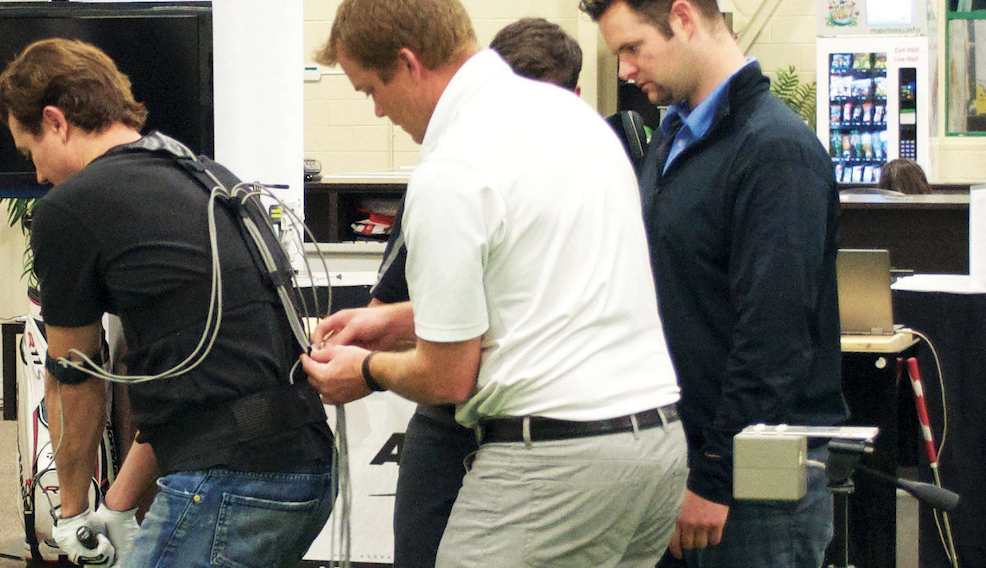 If you said all this was quite impressive for someone who spent a decade just trying to out-bash fellow competitors on the World Long Drive Tour, he would beg to differ. Bias against the game’s top distance-attainers isn’t valid, in Mucklow’s view. “Long-drive golfers are dedicated athletes who study efficiency in the golf motion with a lot of discipline,” he asserts, adding that rapid advancements in the kinesiology of golf have been fueled in part by that search for ultimate driving yardage. In 2013, Mucklow was recruited to help the Titleist Performance Institute launch its worldwide Power Coach Certification program.

An open mind to what works in any sporting endeavor is probably Mucklow’s core asset. As a student at the University of Alberta he played varsity golf but was also an all-star volleyball player and a medalist in badminton. After graduation, he set off to pursue his long-drive endeavors and also compete on mini-tours in the U.S. and Asia. That led to the launch of a coaching career, but as an athlete Mucklow continued to develop, gradually making himself a tournament-quality squash player. He is now ranked among Canada’s top 20 amateur squash players nationally.

Interestingly, he still boils the value of Golf Lab down to its being “an excellent place for the improvement-minded golfer to hit balls.” Specifically, he is talking about each player getting his or her own private hitting bay equipped with two flat-panel monitors, professional-grade video and Doppler-radar launch monitors. “With every swing you take you get a full feedback loop of information,” says Mucklow. “The video shows you what your body did to the club and the launch monitor shows what the club did to the ball. From there you can make positive progress much faster by not mis-identifying any errors.”

A caveat should be introduced here. It has to do with filtering all the numbers that now flow from golf’s technological tools. After Mucklow built The Golf Lab, he saw that more isn’t always better when it comes to data. “I would walk up and down the bays and see people screwing themselves up every day, in what I felt was the world’s greatest performance center,” he recalls. “A 17-handicap looking at Trackman screens and trying to manage 10 or 15 data points is probably headed for trouble,” he notes. This understanding led him to the refined practice of limiting the digital input during direct coaching as well as supervised practice.

“I had a client in recently who was experiencing launch-monitor technology for the first time,” Mucklow says. “He was hitting big slices with the driver and 6-iron both. His path number on Trackman was minus-7, so I got him to work just on changing that.” The golfer’s feeling as he adjusted to the more desirable motion was that it felt awkward, unnatural and unlikely to fix anything. “He had that negative sensation but he battled through it really quickly, and the shots became much better as the number improved,” Mucklow recalls. “People crave the feedback, and a number on a screen gives that to them.”

To match what Mucklow’s facility offers a would be rival would have to go all out. This is a two-story temple to golf performance, including a 3,200- square-foot fitness center on the second level, staffed by two full-time doctors and a full-time personal trainer. “A big part of our clientele is over 35 and their bodies just don’t work as well as they used to,” comments Mucklow. “A lot of what happens up on our second floor is improving golf-specific mobility and stability. It’s not your typical gym where we are concerned with getting people conventionally strengthened or trimmed down.”

The Coaching Arena inside Golf Lab has an open area where clients hit shots off uneven lies— uphill, downhill and sidehill—plus a practice bunker with two types of sand where you can hit greenside explosion or fairway-style shots. Rounding out the amenities is a 5,000-square-foot putting and chipping practice area.

One element of Mucklow’s broad education in the study of golf performance was his stint as a tech specialist on a PGA Tour van traveling the U.S. Sunbelt. During two long Canadian winters, he worked for Scott Garrison, whose van carried the gear of smaller brands like Harrison Shafts, Bobby Grace putters and the like. “Within the many paths you can take to gain expertise as a clubfitter, I found that traveling to pro events and fitting PGA Tour players was uniquely valuable,” says Mucklow. Among the senior people at Golf Lab is one highly valued staffer, Ryan Holley, who holds the inspiring title of Director of Equipment. That isn’t just a reference to clubs, either—golfers can sign up for a high tech golf ball fitting session at GolfLab, as well. Even a motion-analysis approach to golf shoe-fitting is in the wheelhouse.

Colleagues recognize the depth and breadth of knowledge this young professional possesses, which has led to speaking invitations from professional groups. He has lately taken on the role of facilitator for the Coach of Developing Competitors program, which is the highest-level coaching certification program in Canada.

The Golf Lab recently opened a new dedicated clubfitting bay, equipped with another Trackman unit. “We’ve got over 200 different shaft options that we can put on heads from every major manufacturer, so you can come in and get fitted using real golf balls and test the same shaft with a variety of different heads,” he says. “You’ll learn which head works the best with which shaft, and in general have that PGA Tour experience.”

The SST PURE Machine, providing golf shaft alignment and performance analysis, is one special touch among many in the Mucklow-designed Golf Lab. When you are down to orienting the shaft for insertion using the ideal point along its circumference to face the target, that’s taking a deep dive toward optimization. The calm, thoughtful demeanor Mucklow displays seemingly 24/7 matches well with his long record of steady achievement and business expansion. At the same time, it belies the passion required for a journey of the type this curious Canadian professional finds himself on.