Foot Wedge: Influencing Your Student’s Swing from the Ground Up

PGA Professionals use the Foot Wedge to help students improve weight distribution and transfer, as well as footwork

The climate of golf instruction has become increasingly complex in recent years. Technology and the availability of intricate data has driven golf instructors to become part teacher and part tech expert. It’s amazing that an angled piece of plastic has maintained relevancy, but that’s exactly the case with the Foot Wedge. PGA Professionals like John Dunigan and Alan Ochiai utilize the Foot Wedge has part of their instructional programs because there’s no replacement for altering what a golfer feels and delivering physical feedback.

John Dunigan does not fear technology or change. In fact, the 2008 Philadelphia PGA Section Teacher of the Year is not afraid of trying new things because such experiments can lead to better results for both his students and how he teaches. This scenario played out when Dunigan started using the BodiTrak system with his trusted Foot Wedge in his instruction. “I have used the Foot Wedge with my students for as long as I can remember,” says Dunigan, the 2012 Philadelphia PGA Section Youth Player Development Award winner. “In fact, when I was younger and was still learning to play the game, my PGA golf instructor would use the Foot Wedge with me during our lessons. It’s been a staple forever.”

Because the Foot Wedge worked so well for himself personally, he didn’t give it much thought in regards whether or not he was going to use it with his students; the results spoke for themselves. Dunigan uses the Foot Wedge – a lot – in most of his lessons, especially now that he uses the BodiTrak system. “BodiTrak is great because it allows students and instructors to see their weight distribution at address, but it also allows them to see how their weight moves throughout the swing,” says Dunigan. “However, seeing how their weight falls on a certain foot during the swing, understanding what should happen with their weight during the swing and actually producing those ideal results are a much different thing, as many golf instructors already know.” Dunigan explains that while many of his students who have used the BodiTrak system see and understand the problem, a lot of them, somewhere around 50 percent, still have difficulty correcting the issue. That’s where the Foot Wedge comes in.

“It was pretty apparent to me that the Foot Wedge was a perfect fit for BodiTrak right after I bought the system,” Dunigan continues. “The Foot Wedge allows my students to actually feel what their weight change should be during an ideal golf swing. It provides immediate feedback and a very solid majority of my students who need to use the Foot Wedge understand the sensation they are to have after using it only once or twice.” As mentioned, Dunigan claims that he has always used the Foot Wedge in his instruction, but is using it more now that he is teaching the importance of good footwork in the golf swing. He says that it is much easier to use footwork to achieve better results than to manipulate the swing with your hands. Additionally, Dunigan says that a golfer’s footwork is what stops the backswing and what starts the downswing; the timing and the actual weight shift is very important the success of the swing and a Foot Wedge can help students find the proper positions. 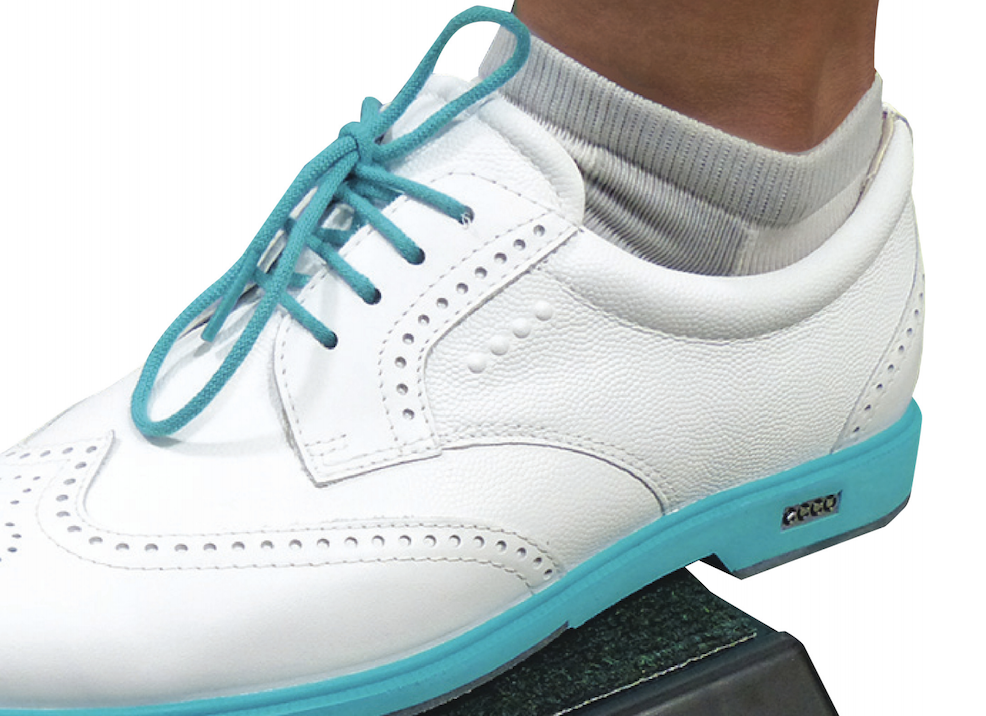 “I like to use the phrase ‘load and explode,’” says Dunigan, a two-time U.S. Kids Top 50 Teacher. “Many golfers, high and low handicaps alike, have trouble successfully getting their weigh through to their leading foot at and after impact, that’s a given. But just as many have a hard time getting their weight on their trailing foot during the backswing; that’s where their power comes from and if they don’t get their weight back, they are missing out on yardage.” That’s the great thing about the Foot Wedge, according to Dunigan: it can be used for the rear foot, which it’s most commonly used for, but it can also be placed under the leading foot to help golfers transfer their weight back in their swing. There is no incorrect way to use the Foot Wedge. It is a very simple training aid, but it can be very powerful too.

The best thing about the Foot Wedge, according to Dunigan? It makes his lessons more efficient. “It does not take as much effort for me to get the weight transition points across to my students when using the Foot Wedge, especially when I use it in conjunction with BodiTrak,” explains Dunigan. “The Foot Wedge provides another level of clarity, and that’s good for everybody involved. Using these two aids together helps students discover for themselves the feeling they should be having and helps them improve quicker and more permanently. It truly makes my job easier.”

For PGA Teaching Professional Alan Ochiai, training aids come in two forms: 1. Those that identify flaws. 2. Those that fix flaws. For him, the Foot Wedge fits into the first category. “Training aids that restrict the body from making a specific error, like the Foot Wedge, are most valuable for feedback and not necessarily retraining the pattern,” says Ochiai. “The offending muscles are likely still firing, and the student can feel that maybe something’s not right. But they’re not doing something to fix the flaw at the moment.” Ochiai prefers to place the wedge under the right foot (for a right-handed golfer) to disallow lateral knee sway to the right. The advantage is an easier and more athletic weight transfer. According to Ochiai, lack of proper weight shift can lead to tops and fat shots because the swing bottoms out prior to impact. In addition, it can lead to pulls or slices because the ailing golfer relies too much on the upper body to route the club. One drill that Ochiai likes to combine with the Foot Wedge is from an excerpt in “Ben Hogan’s Five Lessons: The Modern Fundamentals of Golf.” “There’s an image of him holding a golf club against his right leg,” describes Ochiai. “He does that to demonstrate how there’s no lateral knee sway during the takeaway – which sets him up for the perfect transfer of weight.”

Instead of holding a 5-iron to his students’ leg, Ochiai puts an alignment rod in the ground vertically outside of the student’s back foot – and then tells them to swing without moving the rod. Once they’ve done this drill for a while, he can put them back on the Foot Wedge so the student can feel the stark difference in how the weight transfers. “Each training aid is generally targeted for one specific flaw. The teacher can see the flaw and perhaps show it on video, but that doesn’t give the student a chance to feel the difference between a flawed movement and the correct movement,” says Ochiai. “This training aid is for the student’s awareness and feedback.

“You let the student feel what they’re doing wrong. Then you can correct the faulty foot action with improved set up and hip turn,” he adds. “The final step is having them use the Foot Wedge again with their new motion to once again feel the difference.” One thing that Ochiai warns against is overuse of the Foot Wedge. Student’s shouldn’t hit a full small bucket with this device, as there’s a chance that he or she could twist an ankle if used to vigorously or incorrectly.