North of the border, a super-short season can make spring demand for practice and teaching hard to handle, on facilities that haven’t always enjoyed much investment. Jasper Park is adjusting

It’s an ideal mid-summer afternoon in west-central Alberta. The Fairmont Jasper Park Lodge Golf Course has been bustling all morning long, and now the men’s league is about to take over the first tee. Director of golf Gregg Lown and a student are mid-lesson in complete isolation, despite the property’s lack of a traditional range. Wedged between holes No. 6 and 11 is a ball-hitting hideaway of sorts, cloistered and private. Golfers who pack the luxury resort’s 18-hole links make their way along with no awareness of coach and teacher working on the swing.

It seems like a difficult trick to pull, but acreage the locals call the “back range” provides space and privacy. A heavy cordon of pines rings this open field, acting as a barrier to on-course play. This time of year the grass surface is tawny or even brownish—otherwise the scene resembles a practice paradise. Features include a full-sized practice hole, two tee boxes and a generous short-game area. Fine for now, but practice and teaching are ever more in demand at Jasper Park, so he and his colleagues are planning an upgrade. Lown, a Detroit-area native who has been in town for just a year, eyes major changes to be effected before the 2015 golf season. He sees potential, especially after coming directly from the posh Fairmont Mayakoba in Mexico, host site of an annual PGA Tour event, and before that a well-organized and tech-laden Jim McLean Golf School.

“This range will undergo an extensive irrigation renovation next spring,” says Lown. “The grass looks great into early summer, but by July it’s brown. That will change, and guests will really appreciate the upgrade.” Renovation time depends on how long it takes for the ground to thaw and when workers can start digging. Lown has made the most of what the ol’ back range can provide, but he is itching to get his improvements in place. “At Mayakoba, we certainly didn’t have anything like this,” he says. “We had a typical tour range. At the McLean school, we had two hitting bays and an indoor launch monitor. But having this full-sized practice hole is really unique. We’ll also enhance the hole and hook up a TV rather than just teach on the iPad, so students can see what we’re talking about more clearly. We want to improve everything, make it interesting and new for everybody.” 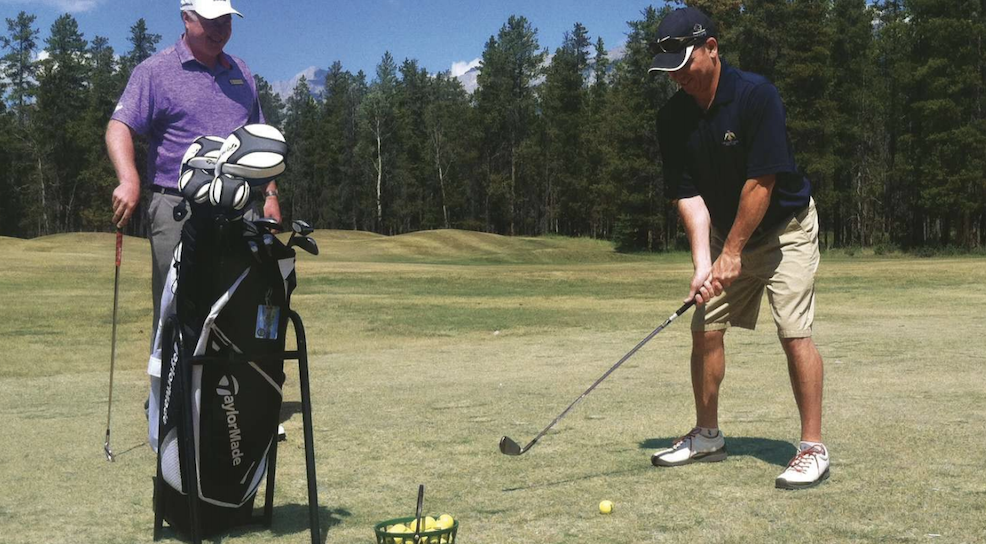 But pristine conditioning is only part of what’s to come—programming will get also get a big bump-up. The Jasper Park Lodge range hosts a wildly popular instruction program every spring that Lown eyes with huge plans. The so-called Spring Swing package stretches from May through the beginning of July. It includes three days of three hour morning lessons followed by afternoon golf with an instructor on the course. Lodging and meals are also included.

“Instruction covers everything from green reading to putting to chipping and pitching to full swing, and then actually playing the game itself,” says Lown. “We teach students at whatever speed they’re at. And that’s the secret. We can’t work with beginners on advanced lessons or hole-playing strategies. We have to work with each individual and help them get better from where they’re at.” It’s an admirable approach, one that area golfers flock to. The perpetually sold-out 12-student program has three pros assigned to cover it, and they don’t get many breaks.

Spring Swing attracts loyalists from Edmonton, Calgary and Kelowna, British Columbia. “They’ll come from pretty far off just to be part of it,” says Lown. “Some groups are back for their 14th consecutive year. I’m trying to keep it fresh, so that they want to continue coming back and experience an enhanced version.” This year, he and his crew introduced green reading and added even more emphasis to the playing-lesson component. “Our pros go out with groups and play a hole as part of each morning lesson, and discuss on-course strategy. But we can’t just teach them the same thing every time. We have to keep it fresh, to keep them coming back.”

One constant that they will stick to is the dozen golfer class size. “Any more than 12 on the practice hole gets impersonal,” says Lown. “But 12 people together will become like a team. We have groups who came from two different clubs, and didn’t know each other beforehand. They were paired together, and now this is their annual getaway to see each other.”

If you’ve got something good, fired by word-of mouth and repeaters, you can always stretch that by using contemporary marketing tools. Now that Lown has experienced a full year of the program, he feels ready to input a new set of tweaks and changes. “We are discussing how to market Spring Swing beyond its loyal returnees, and also how to expand on it. We’re talking about two-day programs—which would contribute to lodging revenue—that might involve play in the morning and then afternoon lessons. We’re looking at whether we could package a full-scale four-day program.”

Discussing these possibilities with Spring Swing regulars, Lown has already heard from a group that wants to include in their program the resort’s signature Cabin Experience. That’s got a notable culinary angle, in which the chef arrives to cook dinner at the eight-bedroom, 7,075-square foot Milligan Manor cabin. Why not? A Canadian golf crew works hard to squeeze a season of golf into too small a time window, so they go at it hard. They need to keep their strength up.