As golf instructors, you’ve probably met countless players of varying skill levels who feel like their swing is zigging when it’s actually zagging. The great thing about mirrors is: They don’t lie. That’s why the Eyeline 360-Degree Mirror has been such a helpful training aid for many golf instructors. It provides instant visual feedback to help your student’s golf swing zig.

For LPGA Professional Deb Vangellow and PGA Professional Bill Abrams, the Eyeline 360- Degree Mirror has been a staple in their training aid toolbox for years. For Vangellow, the 2012 LPGA Teacher of the Year, is a great substitute for students who are a bit camera shy and prefer not to use video. In addition, it’s her go to training aid for checking pre-shot fundamentals. For Abrams, it’s a perfect fit for his teaching style and helps when communicating instruction to his students.

Read on to learn more about how these two professionals have used the Eyeline 360-Degree Mirror to improve their teaching business. Also check out the video from Abrams, who demonstrates some his favorite 360-Degree Mirror drills. 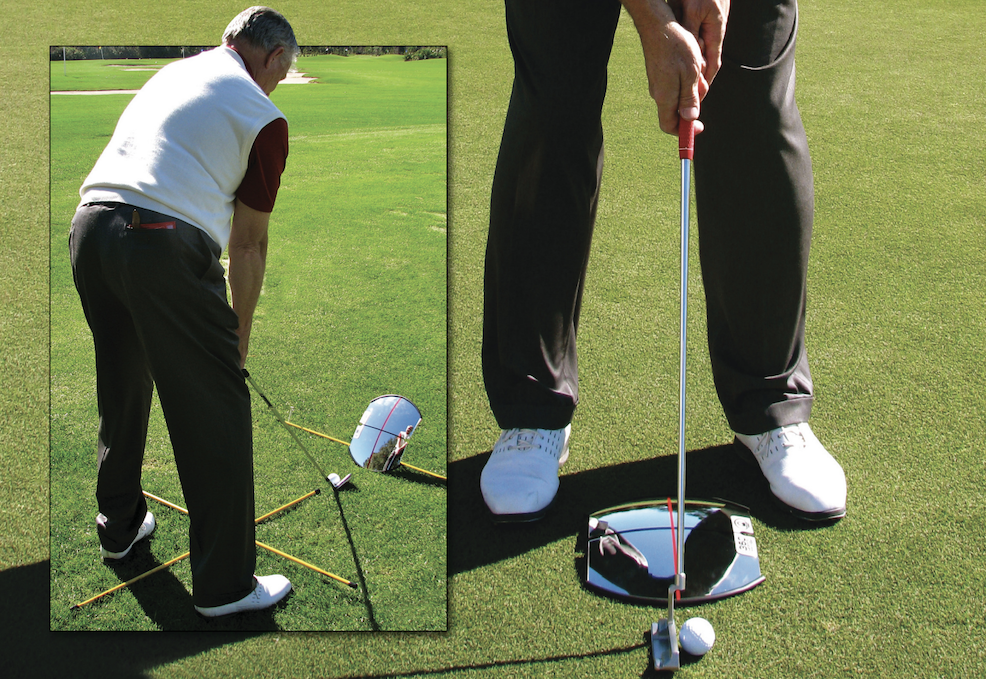 Deb Vangellow uses what works best for her students. She uses “enough technology to be dangerous” including video, ball flight feedback/launch monitors, and other feedback devices, but does not hesitate to go back to the basics, or go “low-tech,” if necessary. The Eyeline Golf 360-Degree Mirror allows her to do just that and “Old school” is a term she wholeheartedlyenjoys. “Video is terrific, but it is not for everyone,” says Vangellow, a Golf Digest Top 50 Best Women Teacher. “Mirrors, especially the 360-Degree Mirror, are great for students who do not desire video analysis; mirrors are instant feedback and very real to people. As some of us know, the mirror doesn’t lie.”

Vangellow explains that the Eyeline Golf 360-Degree Mirror can help students focus on their golf improvement strategies in real-time. She explains that some students respond better with the mirror because it is much simpler, requires minimal training and is easy to use, particularly when they use it during their own practice sessions.

“The 360-Degree Mirror is especially good for position checks during the set-up and swing,” Vangellow explains. “Although this teaching and training aid was designed more for full-swing use, students can even use the mirror to check where their eyes fall when making their putting stroke; the mirror’s angle is wide enough to see if their eyes are in front of, behind or right over the golf ball/line of putt – that’s huge.”

Vangellow, who is also the national vice president for the LPGA’s Teaching and Club Professional Division, says that she uses the mirror mostly for pre-swing fundamentals, such as grip/set-up (face on view), golf shaft lean (face on view), posture (down the line view), distance from the handle of the golf club/golf ball (down the line view), and so on. The one thing that surprises her students most frequently when using the product is how far away from the handle of the golf club – therefore the golf ball – they may be standing.

“They may feel like they are standing pretty close to the golf ball at address,” continues Vangellow, “but in actuality, most students, especially new golfers, stand too far away and reach to the ball. This is one of the best things about the 360-Degree Mirror: it allows students to easily view their posture and arm hang at address, as well as alignment with their shoulders, hips, thighs, knees and feet, takeaway and downswing positions, all with a very simple and relatively inexpensive device.”

The fact that Eyeline Golf improved upon a normal mirror you may find in a homegoods or hardware store with the 360-Degree Mirror is what drew Vangellow to the teaching aid in the first place. She says that the mirror is a “good quality product” and holds up extremely well over time and through thousands of lessons/practice sessions. The mirror has never warped in the hot sun nor has it become “foggy” as some mirrors have been known to do after prolonged exposure to the elements.

“I have used convex mirrors for most of my teaching career,” explains Vangellow. “Some or which were hit or miss in regards to their function and longevity. Since I started using the Eyeline Golf 360-Degree Mirror over four years ago, I have not had any type of issue whatsoever with its performance.”

Vangellow also likes the mirror for its size in that it’s a bit smaller than some of the competitors and, as a result, is much easier to store and transport. She is even able to put it in her teaching golf bag if she needs to. Furthermore, she claims it is very easy to set up for use.

“What is very important is that it is easy for my students to set it up and use when they are practicing on their own,” says Vangellow, the lead instructor for the LPGA Global Education Program and a member of the Golf Advisory Committee for The First Tee. “It’s very efficient and effective, without a doubt.”

Vangellow maintains a “set-up practice station” on her learning tee along with a user-friendly pre-swing checklist so her students can come and practice/self coach using the mirror any time they see fit. She insists that the 360-Degree Mirror is great for visual validation of what the golfer feels.

“Unlike video, the mirror may be more simple and easy for efficient self evaluation, especially with the critically important pre-swing fundamentals,” explains Vangellow. “So much of the success of good/repeating swing motion is a result of a sound set-up; pre-swing components have such an effect on the in-swing components. When students put their focus and attention on these critical components, it is often surprising how everything after the club moves away from the ball falls nicely into place with good sequencing.

“Sometimes, due to user error (camera placement is critical for example), video analysis can be misleading,” says Vangellow. “Because the mirror is so simple to use, the feedback can be easily seen and improvement strategies are often understood with better clarity. Furthermore, there is sometimes great personal discomfort with video – using a mirror therefore seems to be a better choice for numerous folks.”

Vangellow says that the Eyeline Golf 360-Degree Mirror may seem like a very simple teaching and training aid, and that’s because it is, she claims. However, just because it is simple, she says not to discount the effectiveness of the teaching aid. According to Vangellow: Simple is good!

“The mirror is a teaching and training aid that has stood the test of time over the course of my teaching career. Eyeline Golf’s 360-Degree Mirror provided me a streamlined version of something I use daily,” she says. “Without a doubt, this is one of the most utilized teaching aids in my arsenal. Eyeline Golf’s teaching aids help us as instructors support our teaching with effective, efficient and compatible aids, something very much along the lines of teaching the LPGA way: Student centered.”

Like many golf professionals, Bill Abrams was lucky enough to have a great mentor to teach him nuances and theories of the golf swing. Abrams’ mentor, Jimmy Ballard, is one of the best, although perhaps not a household name. Ballard is well known in PGA Tour circles as the instructor of players like Paul Azinger, Rocco Mediate, Jesper Parnevik and many others.

Ballard’s teaching philosophy is called Swing Connection –a common sense approach to golf that relies on body-friendly athletic motions. It’s this same common sense and simple approach that Abrams takes with his students. That’s why, he says, the Eyeline 360-Degree Mirror has been a tremendous instructional tool for him. “The golf swing can become overly complicated if you let it,” says Abrams, a U.S. Kids Top 50 Master Junior Teacher. “But at the root, it’s all about dynamic movement within the confines of your body. In other words efficient and comfortable movement, which make it easier to repeat the motion.

“A lot of times a golfers body is not moving the way they feel it is,” he continues. “That’s where the 360-Degree mirror pays big dividends. The golfer can instantly see how their body moves and it gives them visual understanding of how their swing works.” One unique drill that Abrams has his students perform using the 360-Degree Mirror is centered on proper alignment and set up prior to the shot. He places the mirror on the ground at the feet of the student with the red line pointing toward the target. The purpose to see whether the eyes and shoulders are actually square to the target line. He then uses an alignment rod to show the student how far off their alignment actually is.

“With today’s longer clubs and larger clubheads, it’s easy for golfers to lose track of how they’re set up relative to the target,” says Abrams. “It’s always eye-opening (no pun intended?) when I show my students just how far off target they set up. By pairing the alignment rod with the Eyeline 360- Degree Mirror, it’s easy for them to see. The red line on the mirror is pointed directly at the target, while their eyes and shoulders could be aimed 20 yards left or right.”

Another way that Abrams uses the 360- Degree Mirror is by changing it’s direction so the red line is perpendicular to the student’s stance. This is a way for the student to tell if their spine is tilted too far left or too far right. Even if their shoulders are open or close to the target. “I’ve been using the Eyeline 360-Degree Mirror for years now, ever since I first discovered at the PGA Show years ago,” says Abrams. “It’s a great fit with my teaching style, and it’s a great way for my students to give themselves a checkup between lessons.”