We hear so much about ground force reactions and how they affect the golf swing. We have great technology like BodiTrak, which accurately measures weight distribution throughout the golf swing. However, when our students look at this data, it can be like staring at the results from an MRI test. Technology and data can be powerful, but without practical application it’s meaningless.

That’s where we come in as teachers and coaches. It’s our job to analyze the data, diagnose our students and explain things in a simplistic way that our students can understand more thoroughly and then improve at a more rapid pace.

Then I’ll take my students to the Orange Peel, which has four quadrants marked on top of a curved surface – the curve promotes the proper weight distribution at address. By looking at the four quadrants with my students, I can explain how weight is supposed to transition throughout the swing. What we want to avoid is weight that transitions from the trail toe to the lead heel. Or the front right quadrant to the back left quadrant (for right handed golfers). I encourage my students to develop a feel for shifting weight from the trail heel to the lead toe (back right quadrant to front left quadrant), or straight down the line through the arches of their feet.

Once they develop this feel, I put them back on BodiTrak while they hit balls. They’re able to see the results in terms of better consistency in ball striking, and I can show them the improvements in the data.

What we’re really doing with this type of exercise is creating a process for measuring feel. Showing golfers what the correct feel is, then measuring it and at the same time making it simpler for the student.

Warning Signs: These red flags can slow your students’ progress:

2. The golf you see on TV As your students watch the birdie fests on TV (outside of the U.S. Open) they come to believe this is “real” golf. Indavertently, they fall into the trap of believing they have to make birdie or par on every hole. Amateur golfers have been convinced they should try to play like the pros. This is like trying to perform third degree black belt martial art skills as an orange belt. Remind your students that golf is a process, both in terms of practice and instruction, as well as throughout any given round.

3. Tips, pointers and quick fixes Swing tips, pointers, Band-Aids and quick fixes…Our students drink them up hoping something will “click.” The amateur arrives at the course with a headful of really useless information and only stubborn old bad habits to rely on.

4. An overemphasis on the full swing Hitting only full shots in practice is killing their chances of ever scoring lower. Magazines contain descriptions of the full swing, accompanied by frame-by-frame sequence photos. These pictures are pretty, but pretty useless to the 20 handicapper. Also, many teaching pros are busy using video to analyze the full swing. The average golfer has no chance because he or she ends up overloaded with all these difficult-to-achieve mechanics: angles, parts, pieces and positions.

5. Under emphasis of the short game My dad, Fred Madsen, always went to the chipping green. We chipped and putted, always competing, for hours on end. We had chipping contests in the backyard. We invented chipping and putting games in the house. I’m telling you, his short game was sharp! My Dad had the long game of a bogey golfer. He used hand-me – down clubs. He had the same beat up old leather golf bag and headcovers for years. Nothing was pretty about his stuff or his long game. His scores, though, were very pretty. He shot in the 70s. He had so much fun beating his after-work golfing buddies using his short game, that he never regretted any long game issues.

7. “Dabbling.” Dabbling means saying you’re trying to get better without really doing something about it. Amateurs dabble instead of studying the game and really putting in the time and effort. I hope this helps many of you recognize areas where you can think about and coach this wonderful game we all love. 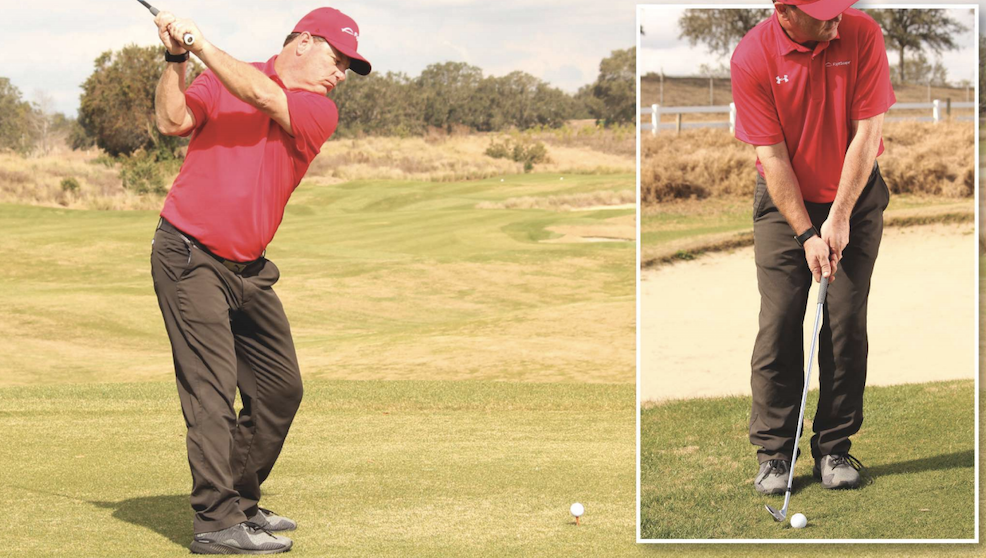 I ’ve seen it far too often. Golfers think they need to hit down on their wedges, so they swing very steeply and clunk down on it – hitting the ground at the same time or well before they hit the ball. This led me to start using a very simple method to teach golfers the appropriate way to strike shots around the green and develop a consistent short game.

I take my tips from Bob Vokey, and thus believe that address with wedges should be very centered and with a neutral ball position (picture 1). The hands are also very neutral (very little forward press at address). From there, I ask my students to rotate the torso on the back swing while maintaining the “Y” position formed by the chest, arms and hands (picture 2). Then I ask them to rotate towards the target while still maintaining the “Y” shape (picture 3). This quickly helps golfers develop a shallower angle of attack and creates ball striking consistency with wedges on short shots around the green.

The sensation that I like to create for my students is that the club is staying down while the body rotates and moves upward. A favorite drill of mine is physically holding my student’s club down while they rotate through.

There is a component of ground force reaction here, with the lead leg straightening and pushing upward. This motion also causes the handle of the club to move upwards as the clubhead reaches the bottom of its swing arc – this motion prevents the steep, digging action we talked about at the beginning. Another drill I use here is the single-leg pitch shot. I’ll have my students balance on their lead leg, with the trail foot in the air and toe in the ground (picture 4). This promotes the proper kinetics and weight distribution needed to shallow a golfers angle of attack.

We know how complex the golf swing can be. By simplifying certain elements of the game, we can better relate to our students and in turn grow our business.

When I’m coaching my developmental junior golfers, who either have the skills to compete or are already competing, I add an element of gamification to our sessions.

One thing we do is called Drive +5, it’s a points-based oncourse game that allows players to work on situational golf and also have fun. I start by having them hit two drives off the tee, if they miss the fairway on either swing a point gets added to their score. Then we pick up their balls and go anywhere from 40 to 90 yards from the green, where they hit a wedge shot in. From there, we go up greenside and they chip/pitch before putting out.

Tallying their score easy. Par is five on every hole (which is where the +5 comes from). So if they hit one of their drives in the fairway, knocked the wedge on the green, chipped it close and one putted – they get a total of four, 1-under par.

Points add up in this game by missing the fairway on the drive, missing the green with the wedge and, of course, by having extra strokes around green.

Beyond Drive + 5, other situational practice we do is just dropping golf balls in challenging locations around the green and work on getting up-and-down. We also do worst ball scrambles, which are a lot of fun for the player, while still helping them develop oncourse strategy and creativity.

It’s all about scoring. We’ve learned that the clubs that impact scores the most in golf are the driver, wedge and putter. So those are the clubs we focus on in Drive + 5. If players more consistently find fairways, can hit it close from 100 yards and in, and are efficient around the green than they can produce solid scores.

It can be sometimes be difficult for men instructors when teaching women. There are certain anatomical nuances that make our bodies and golf swings different.

One of the biggest differences is in the hips and upper body strength. A lot of times, women tend to be more flexible than men. So on the takeaway, we can turn our back to the target and create a full shoulder turn much easier. From there, it’s a matter of getting female golfers to activate their hips first before starting the upper body in the downswing.

In many cases, men can compensate for a lack of flexibility by using upper body strength to create speed on the downswing and relying on their hands, wrist and forearms to square up the clubface. Whereas with women, upper body movement is not always the best way to generate power and speed in the swing, it starts with the hips.

One exercise that I like to do with women golfers to encourage this hips-first downswing is the resistance band drill. I’ll attach a large resistance band or a cord to a stable object on the range, and then have them grip the band like a golf club. I’ll then have them move into a backswing position where the arms are virtually parallel to the ground and they can feel some resistance on the band.

Then I have them pull into the left side of their body (for right handed golfers), making sure to move their hips first and allowing the arms/resistance band to follow (see photo sequence). After doing that a few times, I have them switch and do the same exercise from the left-handed position (for right-handed golfers).

By switching, they increase rotational flexibility in the hips. Another benefit of this drill is that it helps develop forearm strength, which is important for having more control over the clubface throughout the swing and at impact. Ultimately, however, this exercise promotes the proper sequencing of the downswing and helps women understand that power in their golf swing starts with flexibility and the hips.