Bending the Rules of Instruction

Award-winning teacher, Mike Bender, created a device the provides negative feedback, which can be a positive thing when it comes to learning

“You learn three to four times faster from negative feedback,” says Bender, operator of the Mike Bender Golf Academy at Magnolia Plantation Golf Club in Lake Mary, Florida. “We found that negative feedback is a more powerful way of learning. In those instances, students sense the problem and learn how to make corrections on their own.”

With that goal in mind, Bender created the Benderstik about seven years ago as a simple way to help students feel what they’re doing wrong.”

With that goal in mind, Bender created the Benderstik about seven years ago as a simple way to help students feel what they’re doing wrong. 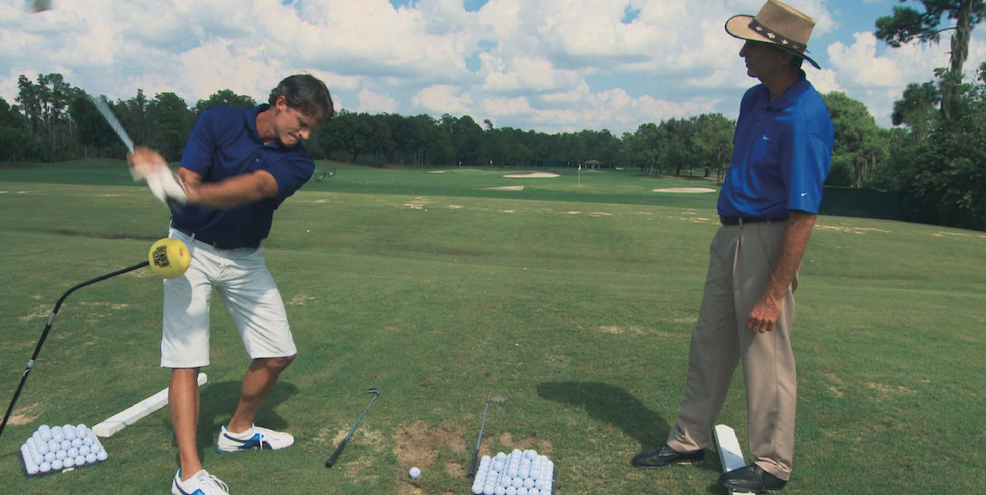 The item is just that – a stick that is adjustable, bendable and has a large foam ball attached to one end. It can be set up for each golfer’s individual swing inconsistencies, whether that’s coming out of his or her posture, excessive head sway, a downswing that’s over the top or flipping the clubhead at impact. In other words, if you swing incorrectly your head, another body part or the club bumps the foam ball. Thus, the negative feedback.

“It really works on so many different swing faults and flaws,” says Bender, the 2009 PGA Teacher of the Year. “That’s part of its beauty – the simplicity and instant feedback helps a player groove the correct motion, because if they don’t they’ll continue to bump the ball.

After a while they’ll be able to make good swings on their own, with or without the device in place. The more you practice with feedback, the more ingrained the new motion becomes and the more reliable the new swing.”

Like many inventions, the Benderstik was born out of personal experiences and tinkering. At the start of his golf career in the early 1980s, Bender had what he thought was a solid swing…until he saw it on video.

“So I watched the video and went off to the range thinking I was breaking bad habits and grooving a proper swing, but then I’d have another video session and see that I was doing the exact same things as before,” Bender says. “There was no feedback on the range for me.”

So he started sticking shafts in the ground to give himself the “negative feedback” that he desired. Since he wanted his left arm to work deeper in the backswing rather than lift upwards, he knew that if his arm or shoulder hit the shaft that his swing wasn’t where it needed to be.

As his teaching career evolved and became his focus, Bender created the MEGSA training system for teaching at his range. The setup involves 15 stations that allow golfers to practice the aspects of their swing deemed most important to their development. Since it’s large, basically immovable and a station-to-station way of learning, Bender got an idea from a college coach that used the system for creating a more mobile device that could ingrain the same good habits.

Out of that came the Benderstik, which can be positioned to influence at least eight major elements of the swing – from takeaway and hip turn to the follow through. Unless that part of the swing is executed properly, the ball interferes with the arms, head or hips, and a swing that doesn’t contact the ball begins to build good muscle memory.

“What’s great about this is that it can be moved around and transported easily for use anywhere and at any time,” Bender says. “I can also put it in various positions around the golfer depending on whether I’m trying to keep their posture in balance or their swing on the proper plane. The mobility and instant feedback are really handy. Students now know what they’re supposed to be doing and can get it right with continuous repetition.”

Bender sees beauty in that type of simplicity from a device that requires no straps, video monitors, confusing numbers or complicated theories.

“Some of the technology available out there is incredible,” Bender says. “The high-tech stuff, when it comes to golf instruction, is mostly analysis and doesn’t necessarily make someone better. It shows them what the goals are or what they should be doing but not how to attain those goal on a practical and purposeful basis.”

Bender also values the versatility of the Benderstik because it’s not a one-trick pony when it comes to instructing students.

“The thing I like about it is that it’s not conducive to any certain teaching philosophy,” he says, adding that any instructor or player can use it because it comes in halves and can be stored in a golf bag. “No matter your teaching style, or the learning style of a student, this gives you an instant message about what went wrong.”

And once the player starts feeling the correct path, chances are he or she will take that swing to the course on a more consistent basis.

“The negative feedback that the Benderstik provides really helps a player groove the motor skills and movements that are key to a good golf swing,” Bender says. “This is a really successful tool. After a lesson you want your students to go away with something that they can practice and get better at. That’s what we’re all after, and this can help with that.”