A World-Class Practice Facility in Milwaukee 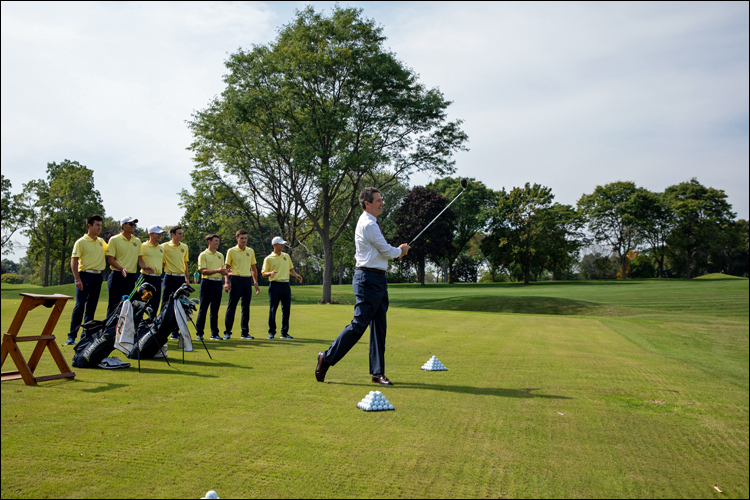 Having access to a comprehensive practice facility is vital to any successful collegiate golf program and is an important amenity for club members as well. Thanks to a $1.4 million project and partnership with Marquette University, the University Club of Milwaukee has a practice area that could rival most others across the country.

Dylan Hills, PGA Director of Golf at the University Club of Milwaukee, described the insufficient practice areas the club once maintained. Partnering with Marquette University allowed the club to redesign three holes in order to make room for a “world class practice facility for their team [and University Club members] to utilize.”

The undertaking started in August of 2018 and the facility was scheduled to open during the summer of 2019, but nature intervened. “We had record rain falls in September and October of 2018 followed by record rainfalls in April and May of 2019,” said Hills, which pushed the opening of what is called The Swift Family Golf Training Facility to this spring. 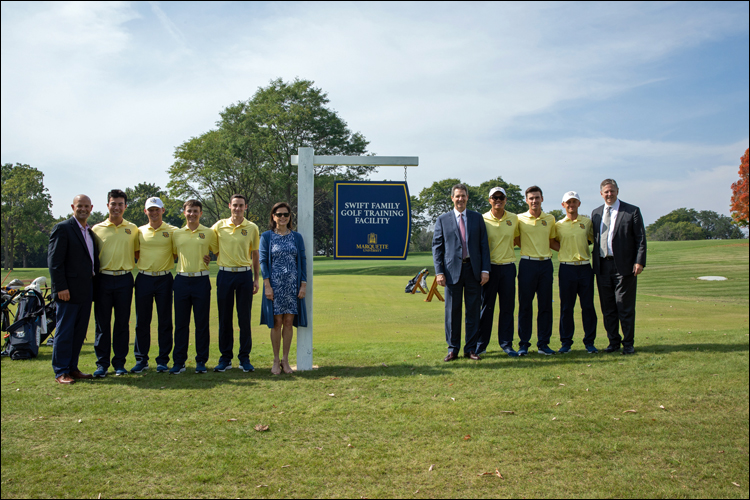 The project created three very distinctive areas – a three-hole practice course with holes as long as 180 yards, two adjacent chipping and putting greens, and a wedge range. The greens can be used as practice stations when the course is not in use. There are two practice greens near the tee of the wedge range, one for chipping, pitching, and bunker practice – the other a putting-only green. On the wedge range, there are ten concrete target discs that range from six to twelve feet in diameter. The discs start at thirty yards and go out to 110 yards. 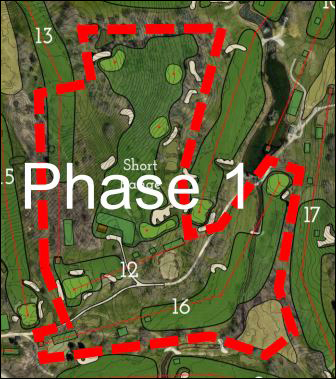 The University Club of Milwaukee initially approached the Marquette golf program in early 2016 about a partnership to create the practice facility, as well as allowing the team to have access to the golf course. Marquette golf coach Stephen Bailey is ecstatic about the project and the impact it will have on his players and program in general. Said Bailey, “We are thankful for the support of the Swift family and so many others that made this dream a reality.” The new facility at University Club, along with a new indoor golf center and dome on campus, as well as access to other top golf courses in Milwaukee, allow his program “to rival the elite programs in all of college golf.”

Chris and Mary Swift are both graduates (1983) of Marquette University. Chris Swift was a member of the golf team, as was his son C.J. Swift from 2012-16. The family gave a “very generous” gift towards the facility, according to Coach Bailey. 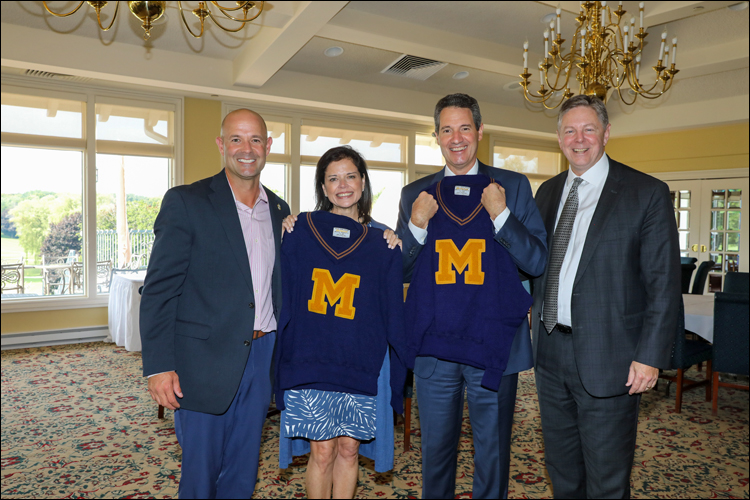 “The Swift Family Golf Training Facility is unique because we were able to work first-hand with golf course architect, Andy Staples (Staples Design), and the club to build a practice facility that will challenge our players and help them improve every facet of their games. Andy and his team did an amazing job of taking our vision in creating the facility. The players are extremely excited to have a new home for practice in such close proximity to campus.”

Hills also believes the new practice facility is a game changer for the club. “We are a family club and having this space for all to utilize will be a strong asset. Additionally, we can use this space for concerts, gatherings, and competitions. The opportunities are endless.” According to Hills, the practice facility will “allow our members to use the course more, which hopefully equals more fees coming in. Having a big junior golf program will allow us to showcase the area to families.”

The club created a master plan for the entire facility. Said Hills, “The practice area has a different look than the rest of the course because we had been overrun with trees. Members love the look of the area and seeing vistas from across the property. The response has been very positive.”

As part of the project, changes were also made to the golf course proper. About five acres of forest area were cleared and hundreds of stumps removed. An entirely new 12th hole, a 210-yard par-three, was built. The tee complex for the 13th hole was moved about 100 yards, turning the 410-yard par-four into a slight dog leg left. In addition, the 460-yard par-four 16th was reshaped. A creek on the right side of the hole was moved about thirty yards to provide a more generous landing area off the tee. 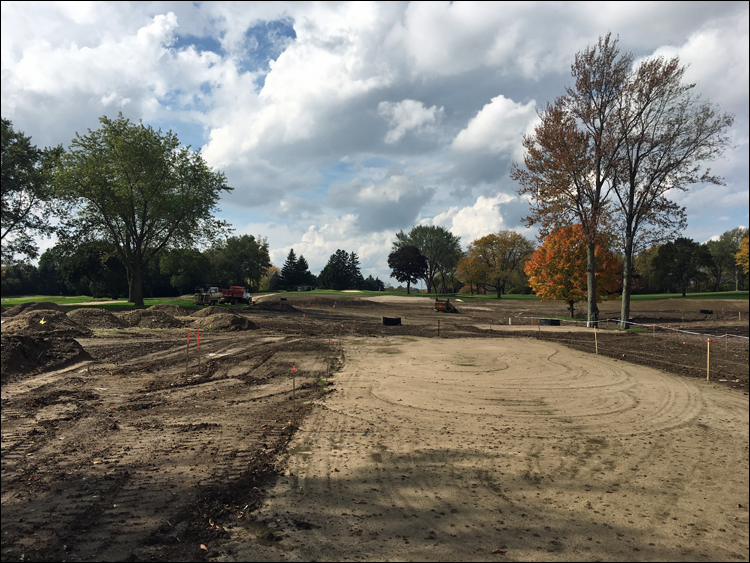 At its previous distance from the forward tees, it was “one of the longest courses in the state for women,” said Greg Dick, the club’s PGA General Manager. “In addition to the shorter women’s tees on 12, 13, and 16, we also added new women’s tees on the par-five 11th and par-three 14th. Moving those five tees took about 130 yards off the length of the course for the ladies and made it much more fair and enjoyable.”

Dick opined The Swift Family Golf Training Facility gives his club “the finest practice area in southeast Wisconsin, only major championship venues, Whistling Straits and Erin Hills, can compare. As time becomes a more treasured commodity, the ability for our members to come out and spend an hour or ninety minutes playing the short course or getting quality practice in is valuable.” He believes the practice facility and course improvements will drive new memberships. 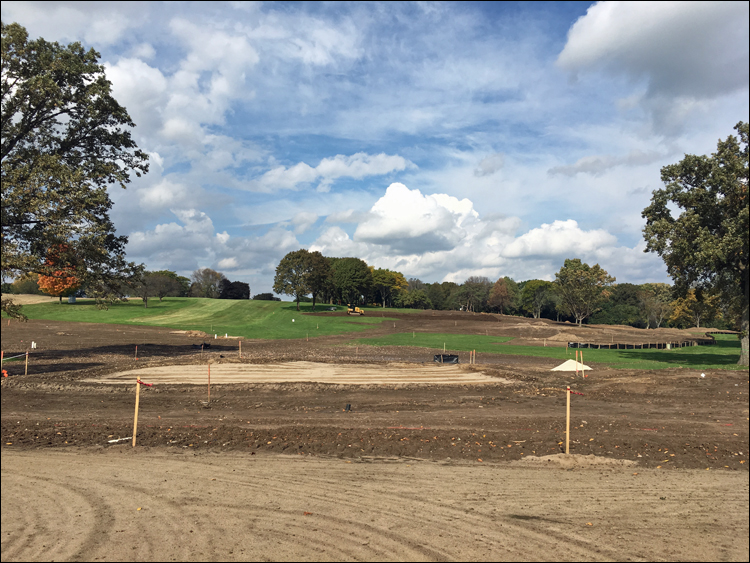 Dick also predicted the practice facility will have a considerable impact on junior golf at the club. “We already have a tremendous program that involves 150 to 170 kids each summer. The short course is the perfect place for the younger kids. This is truly a win for all ages.”